The wraps (and the roof) come off the new McLaren 12C Spider, a convertible supercar that'll top 200mph 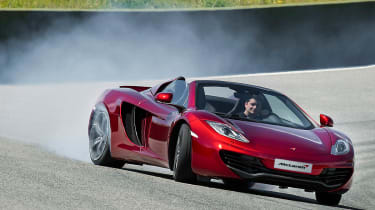 McLaren has revealed its new 12C Spider, the convertible version of its Ferrari 458-rivaling MP4-12C supercar. Like the 458 with which it shares its name, the 12C drop-top uses a folding hard-top rather than a canvas hood. The roof retracts at speeds up to 19mph (30mph) and folds away in 17 seconds. As with many of its supercar rivals, there’s a rear windscreen which can be raised when the roof is down, to increase wind resistance, or dropped when the roof is up to pour V8 noise into the interior. There’s a rollover protection system, the buttresses behind driver’s and passenger’s heads containing a tough steel structure. All in all, the convertible mechanism adds 40kg to the 12C’s weight – taking it to a 1474kg total – but otherwise the Spider is the same as its Coupe sibling. The MP4-12C was originally designed as a convertible, so its carbonfibre ‘MonoCell’ chassis needed no tweaks or additional strengthening to accommodate the roof chop. The Spider uses the same drivetrain as the coupe in its updated 2013 trim. Its twin-turbo 3.8-litre V8 boasts 616bhp and 442lb ft, and drives the rear wheels via a 7-speed twin-clutch gearbox (dubbed SSG). It whisks the Spider to 62mph in 3.1sec and 100mpg in 6.1sec; figures that closely match the coupe. The ¼-mile takes 10.8sec and its top speed is 204mph, both slightly slower than a fully roofed 12C. The Spider’s claimed 24.2mpg and 279g/km of CO2 emissions equal the coupe. The 2013 McLaren 12C Spider is on sale now, with deliveries starting – unusually for a roadster – as the UK winter gets into its stride this November. Prices start at £195,500, a rise of nearly £20,000 over the coupe. It undercuts its arch rival, the Ferrari 458 Spider, by over £3000.