The McLaren MP4-12C performs on the snow in a new ice-driving course. Pictures and details here 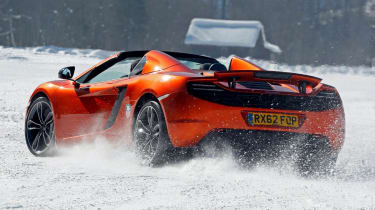 McLaren has released images of is MP4-12C in action on the snow.  Both MP4-12C coupe and 12C Spider convertible supercars took to a frozen lake in an ice-driving school in Gstaad, Switzerland. The host of hard-tops and roadsters were adorned with winter tyres, stopping them from getting too beached in the resort’s snow, which on average is 13in deep in the winter months. It looks like enormous fun, though quite how much of the 616bhp produced by the MP4-12C’s 3.8-litre twin-turbo V8 engine proved useful we don’t know. We doubt the 12C’s 3.1sec 0-60mph time or 207mph top speed are deployable, at least, but then snow driving is more about grip than specs… Click the pictures to enlarge them or click to read our McLaren MP4-12C review

Meanwhile, McLaren North America has pitched the new 12C Spider against an X-Games snowboarder in a race through the Rocky Mountains. With Pikes Peak record holder Rhys Millen at the wheel, does the supercar stand a chance? Video below...