Honda returns to Formula 1, rekindling its relationship with McLaren made famous by Senna and Prost 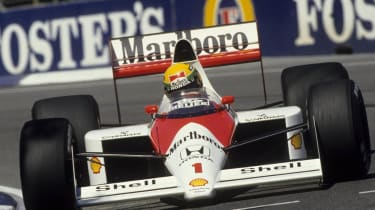 Honda is returning to Formula 1. The Japanese firm left the sport in 2008, but returns from the 2015 season rekindling its famous relationship with McLaren. McLaren will be renamed McLaren-Honda, recalling the late 1980s and early 90s period in which Alain Prost and Ayrton Senna fought so furiously to a combined four world championships. Honda will be McLaren’s engine supplier, tempted back into top-level motorsport by F1’s new engine regulations, which debut in 2014 and require teams to use a 1.6-litre direct injection turbo V6.  The chance to develop its own new technology (while also grabbing some Sunday afternoon limelight) was too good an opportunity to miss, according to Honda president and CEO Takanobu Ito. ‘The new F1 regulations with their significant environmental focus will inspire even greater development of our own advanced technologies and this is central to our participation in F1.’ McLaren CEO Martin Whitmarsh is keen to take McLaren back to those heady Honda days, which seem especially distant after an indifferent start to the 2013 season. ‘The names of McLaren and Honda are synonymous with success in Formula One, and, for everyone who works for both companies, the weight of our past achievements together lies heavily on our shoulders.’ The decision is welcome news for performance car fans, going hand-in-hand with confirmation of a new Honda NSX and the return of Type-R hot hatchbacks.