McLaren has confirmed that it will produce a limited number of the 650S by the McLaren Special Operations. Details here 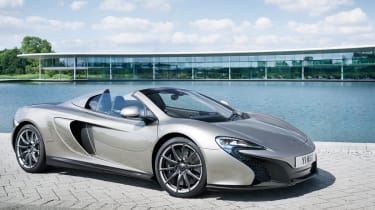 McLaren has announced that it will be releasing its new 650S by MSO at the Goodwood Festival of Speed this weekend. The new model adds a selection of bespoke parts to either Coupe or Spider bodystyles.

Limited to just 50 units, McLaren will charge £252,500 for the Coupe, and £272,500 for the Spider – before any optional extras are specifies. The MSO production model sticks closely to the original MSO concept car visually, adding a few unique touches to the bodywork, while leaving the engine and running gear untouched.

Changes include MSO carbon Side Blades, as well as a new rear diffuser and bumper centre section. Working with design director Frank Stephenson, the MSO department has also added a number of special satin finish carbon fibre panels to the 650S. Inside, the interior is finished with a selection of black leather, alcantara and lots of carbon fibre. There's also a numbered plaque for each example.

In place of the standard wheels, the 650S MSO has got a set of ten-spoke lightweight alloy wheels – said to save over 4kg in weight. There will be a choice of three paint colours for the MSO; Papaya Spark, Agrigan Black and Sarigan Quartz – which will be shown at Goodwood.

Everyone who buys an MSO 650S will also receive a signed sketch from Frank Stephenson, as well as a ‘stealth black carbon’ leather holdall.