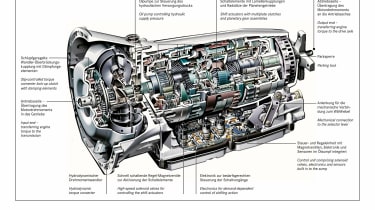 First Mercedes gave us a 7-speed ‘box in the form of the 7G-Tronic (pictured).  Lexus came along soon after and trumped that with the eight-speeder in its ISF.  Now Mercedes plan to take back the ‘most ratios in the ‘box’ crown with its planned 9-speed gearbox, dubbed the 9G-Tronic.

BMW and Audi are now offering eight speed ZF gearboxes, but Mercedes believes that nine will be able to offer greater flexibility and improved fuel economy, not to mention lower CO2 emissions.  Put simply, more ratios allow an engine to spin at its optimum rev-range for best fuel economy and lowest emissions for longer.  And with increasingly tough emissions legislation coming in, Mercedes - with its large cars and equally sizeable engines - will need to find more innovative ways of keeping things clean.

Why nine speeds? Well, Mercedes believes that nine is the most gears that consumers will find acceptable. They also think that a ten-speed 'box may not be technically possible.

The new gearbox is only planned for Merc's larger displacement engines at present and may well debut in the 2012 redesigned S-Class.