Mercedes showed off the new ML63 AMG at the 2011 Los Angeles motor show, complete with its twin-turbocharged V8 engine 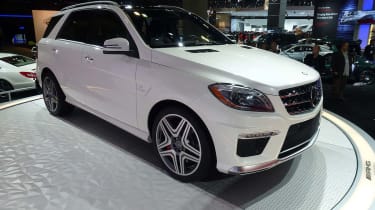 Another debut at the Los Angeles motor show was that of the Mercedes ML63AMG, set to become one of the fastest SUVs in production when it goes on sale next year.

The ML gets the same twin-turbocharged 5.5-litre V8 that we’ve already seen in the new E63AMG, with 518bhp and 516lb ft of torque (or 549bhp and 560lb ft with the optional AMG Performance Pack.) Despite the boosted output it’s claimed to be nearly 30 percent more efficient than the previous version, with an official EU test score of 23.9mpg.

Power is transmitted to all four wheels via Merc’s seven-speed automatic transmission. This comes with AMG’s speedshift system to smooth and quicken changes. Top speed is limited to 155mph and the 0-62mph time falls fractionally to 4.7 seconds – identical to that of the mighty Porsche Cayenne Turbo.

Prices are yet to be announced, but anticipate having to pay north of £80,000 (before options) when the car goes on sale in the UK next spring.

Mercedes also showed off the new SLK 55 AMG – complete with its all-new naturally aspirated 5.5-litre V8 engine – and the stunning C63 AMG Black Edition on its stand at Los Angeles.