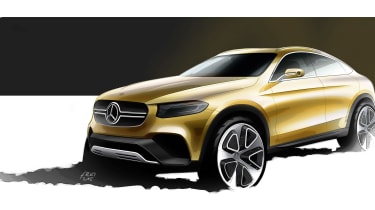 Mercedes has released a sketch of its Concept GLC Coupe. Described as ‘near-production-standard,’ the four-door concept SUV appears to take the GLE Coupe’s form in a more compact size.

The non-Coupe Mercedes GLC isn’t due to arrive in the UK until late 2015, targeting compact SUVs like the BMW X3 and Land Rover Discovery Sport.

It will share powerplants with the C-Class saloon, meaning it’ll receive a range of turbo petrol and 2.1-litre diesel engines. It’s likely a plug-in hybrid and AMG-Sport variant will also follow.

If this Concept GLC Coupe makes production, in AMG-Sport form it could also receive that car’s 3-litre twin-turbo V6 (first featured in the new C450 AMG-Sport), with as much as 362bhp and 370lb ft on offer.

The Shanghai design study Concept is expected to make an appearance at the Shanghai motor show later this month. There's no word as to whether it'll make production as of yet.