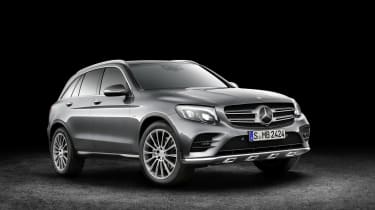 Mercedes has pulled the wraps off its GLC SUV in Metzingen, Germany, ahead of the model’s UK arrival this Autumn. Set to take on the BMW X3, Audi Q5 and Volvo XC60, the GLC is a bigger, more efficient and more luxurious replacement for the GLK.

If you haven’t heard of the GLK, it’s because it never came to UK shores, or any right-hand drive market for that matter. The reason was due to complications with adjusting the four-wheel drive system to work with right-driven cars, something the GLC has managed to avoid. As such, it is the first Mercedes of this class headed for the UK, filling a crucial market gap that has previously remained uncharted by Mercedes.

Thankfully for us, this is far more than just another market-plugging SUV, because we’re confident that it’ll spawn a high-performance GLC450 AMG Coupe model to take on the impressive Porsche Macan…

Based on the C-Class platform (hence the C in its name), the new GLC is suspended on aluminium four-link front and aluminium five-link rear suspension. You might not think this car-based setup would stand much chance on rougher terrain, but Mercedes promises that the GLC is a capable off-roader.

Optional fitment of air suspension also comes with continuously variable damping. The system can automatically level the car, compensating for roll, and can be adjusted through five driving modes - Eco, Comfort, Sport, Sport+ and Individual.

The GLC is the only model in its class with this type of air suspension, which Mercedes says enables it to continuously counter body roll and therefore improve agility. Sport mode, for example, lowers the ride by 15mm and stiffens the damping, while Comfort does the complete opposite. Mercedes reveals the dampers take just 60 milliseconds to react. 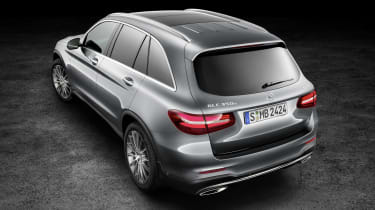 The GLC is both longer and wider than the GLK, growing to 4656mm in length and 1890mm in width. If you live in the UK this means little, but compared to the BMW X3, the GLC's dimensions are nearly identical (the X3 measures 4657mm and 1881mm in length and width).

Similar as it is on paper, Mercedes wants the GLC to appear sportier than its rivals, and as such has given it a narrower glasshouse. Its roof is 1639mm from the ground, 39mm shorter than the BMW, and combined with a saloon-like bonnet, it gives the GLC a sleeker profile.

The GLC is constructed from a high percentage of lightweight parts, with high-strength steel and aluminium used extensively in the chassis and suspension. The results ensure the GLC weighs between 1735kg and 2025kg, depending on the drivetrain (more on those below).

The GLC comes available with a choice of three of the C-Class’ engines in the UK, comprising two diesels and a hybrid. The diesels are expected to be the biggest sellers in the UK and are the only available units at launch.

Both diesels send drive permanently to all four wheels through a nine-speed 9G-Tronic automatic gearbox. Splitting torque between the front and rear axles is a central differential with a multiple-disc clutch.

In mainland Europe a 250 2-litre four-cylinder petrol will follow as the smallest engine on offer, but with the help of a turbocharger it’ll produce 208bhp at 5500rpm and 258lb ft between 1200 and 4000rpm. It’ll send drive to all four wheels through a 9G-Tronic gearbox and the multiple-disc clutch diff. 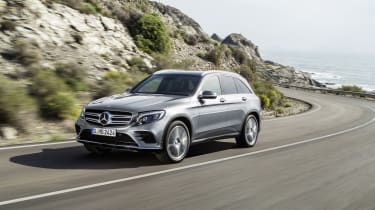 The other UK-bound engine is a tech-heavy 350 e 4MATIC plug-in hybrid. When it arrives later in the year, it’ll feature the same 208bhp and 258lb ft petrol engine as the 250, but in the 350 e it's mated to an electric motor. The motor adds 112bhp and 251lb ft of instant torque, bringing total output up to a claimed 320bhp with a hefty 413lb ft of torque available. Drive is sent through a seven-speed 7G-Tronic Plus automatic gearbox.

Claimed CO2 emissions also fall to 60g/km and combined mpg will grow too – the figures are yet to be released – helped by up to 21-miles of all-electric range. Mercedes says it takes 2 hours to add 20 per cent energy to the 350 e’s 8.7kWh battery; to add the full 80Ah of energy, you’ll need to plug the 350 e in for a little over four hours.

But while the diesels are economical, better performance can be found with the petrols. The 250 GLC can accelerate from 0-62mph in a claimed 7.3sec and on to 139mph, while the 350 e hybrid has enough grunt from its petrol-electric drivetrain to offset its 2025kg kerbweight. 62mph arrives in a claimed 5.9sec and top speed is quoted as 146mph, giving the two-ton SUV the straight-line performance to worry the likes of proper hot hatchbacks.

Though Mercedes won’t confirm it for some time, a proper AMG performance model should be on its way next year. Built around a GLC Coupe bodyshell (which we’re also predicting the arrival of), it’ll likely be powered by a twin-turbocharged 3-litre V6 engine with around 362bhp on offer, as previewed in the GLC Coupe concept earlier in 2015. 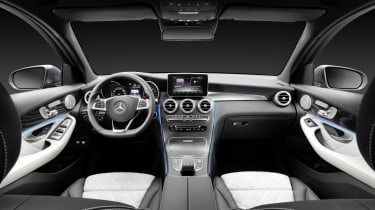 The GLC borrows many of its styling cues from the C-Class, and Mercedes isn’t ashamed to admit that the features have been used to make the SUV appear sportier. Standout features include a coupe-like glasshouse, a lengthy bonnet as well as C-Class-esque lights and 17- or 18-inch alloys with Exclusive trim, 20-inch wheels with AMG Line trim.

Inside, things look familiar again, with the dash and buttons being directly carried over from the C-Class. The tech is unsurprisingly very similar too, with a 7-inch colour display fitted as standard – a higher resolution 8.4-inch unit comes as part of the optional Comand online pack – and Garmin Map Pilot satnav. Optional features include automatic climate control, heated front and rear seats.

The GLC will also be available in Edition 1 trim on launch, with two interior variants – designo black or designo two-tone – available with standard fit AMG trim outside and an AMG steering wheel inside.