Mercedes-Benz lays out its plans for hybrids, electric cars and fuel cells - as well as internal combustion 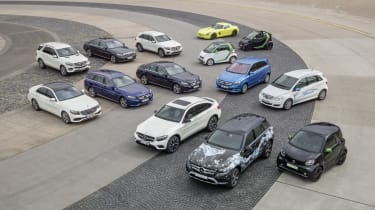 Daimler has laid out its driveline technology plans for the next few years at a 'Road to the Future' event in its home town of Stuttgart.

The plans detail the firm’s £11billion commitment to electric and fuel cell mobility, but also confirms Mercedes’ stance that there’s still plenty of life left with internal combustion engines - even if that means virtually every model in the carmaker’s range will at some stage become electrified. 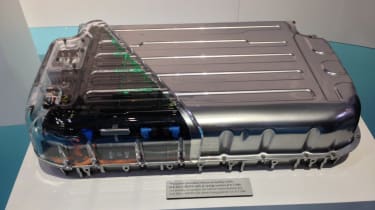 By 2017, Mercedes-Benz will offer ten plug-in hybrids across its model range - though some of those won’t be offered for UK sale.

That’s up from the current tally of eight, and represents Mercedes’ assertion that plug-ins are currently ‘the best of both worlds’, allowing for zero-emissions local driving and avoiding the “range anxiety” present in full electric vehicles.

The key will be improving the electric portion of the cars’ overall range, and that’s a process already in action. Currently, Mercedes uses an 8.7 kilowatt-hour lithium battery pack in its plug-in models, but by 2017 this will expand to 13.5kWh (enough for around 31 miles of all-electric range) with no penalties in terms of size or weight - in effect, much greater capacity from a battery the same size as in current models.

Remarkably, Mercedes predicts this to jump even further, increasing by a further 30 per cent by 2020 and offering around 75 miles of range by 2025 - comfortably over double that of existing plug-in hybrids. It’s all down to improvements in the cell chemistry. 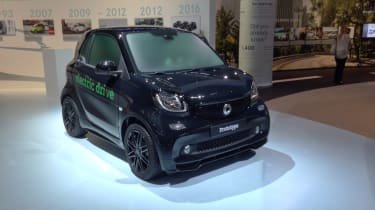 First on the horizon here is an example of the vehicles best suited to electric power: the Smart range. Daimler will unveil a new Smart Fortwo, Fortwo Cabrio and Forfour Electric Drive at the Paris motor show this autumn.

The car’s new drivetrain was on display in Stuttgart along with a prototype body, though the battery pack on display appeared to be from the outgoing model (with a 17.6kWh capacity). The new car will offer greater range than the existing model however, and could be cheaper - the secondary benefit of improved battery technology is a reduction in cost, as well as an increase in capacity.

Electric power as a whole will slowly permeate throughout the Mercedes range, starting with a new vehicle also set to be previewed in Paris. Mercedes is describing it only as a ‘larger’ electric car, and the sole engineering diagram of its powertrain makes its size hard to judge.

The range is quoted as being 500km (around 310 miles), putting Mercedes’ future product roughly on-par with a Tesla Model S. 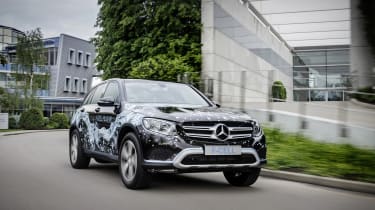 One of a handful of companies putting its faith in fuel cells, Mercedes will launch the GLC F-Cell in 2017.

The main benefit over a pure electric model - since the quoted range is an identical 500km (310 miles) to the newly-announced electric car - is refueling time.

Customers taking part in the existing Mercedes B-class F-cell test program have an average refueling time of 2.8 minutes, which isn’t dissimilar from that of a combustion vehicle and shouldn’t prove as off-putting for consumers as the multiple hours an electric vehicle can take to recharge on anything but a fast-charger. 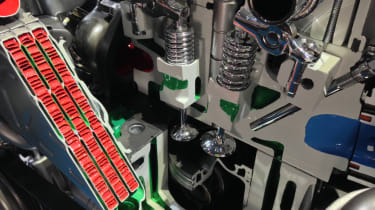 Mercedes' head of strategy and product planning, Wilko Stark, insists that internal combustion engines will continue to be a huge part of global mobility for at least the next decade, and likely a significant time after that.

That includes diesels, which have attracted flak in the past year in particular thanks to Volkswagen’s emissions cheating devices and the realisation that particulate matter has contributed a significant degree to inner-city pollution since diesels became more popular.

For Mercedes, the answer is engineering its existing diesel engines to meet upcoming Euro 7 emissions regulations, which come into force officially from September 2017, with the continued use of urea injection - marketed as BluTec.

But one other component of current diesel powertrains - particulate filters - will see increasing use in petrol models too. The Mercedes-Benz S500 already uses a petrol particulate filter and these are set to dribble down the Mercedes petrol range in the coming years. 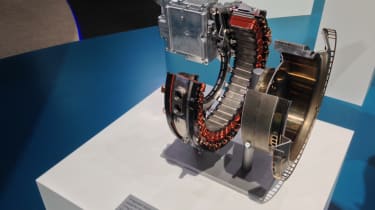 As will improved battery technology, both in the form of a 48-volt electrical system - able to store and release large amounts of energy to deal with ancillary demands such as in-car tech and higher-output items like active anti-roll bars - and “mild hybrid” technology. This uses a 48-volt, belt-driven alternator.

The latter has existed on the market for some time already with technologies like Honda’s Integrated Motor Assist. The concept - which Mercedes calls an Integrated Starter Generator (ISG) - is that a slim electric motor sits between engine and transmission, storing energy under deceleration and supplying it under power. Like Honda’s old system (and unlike more conventional hybrids) ISG wouldn’t drive the car in full EV mode, but takes the strain off the combustion engine without a large weight penalty.

Asked if it would eventually be used throughout the range - down to models like the Smart Fortwo, for instance - Mercedes would not commit, though the company does confirm it’s currently best suited to longitudinal engine configurations, and in particular the brand’s upcoming inline-six petrol engine.