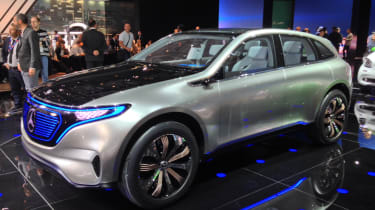 Mercedes has unveiled its ‘Generation EQ’ concept car at the Paris Motor show. The car previews what Mercedes says is its new sub-brand for electric cars, called EQ.  According to Mercedes, the name stands for ‘electric intelligence’ and will be aimed at bringing electric sports cars into the mainstream.

The Generation EQ concept uses a pair of electric motors capable of a total output of 300 kW paired to a permanent four-wheel drive system. Range is said to be up to 310 miles, putting the concept firmly in Tesla Model S territory for distance between charges. Performance also appears suitably Tesla-like. Mercedes states up to 516 lb ft of torque as well as a sub five second 0-62mph time. 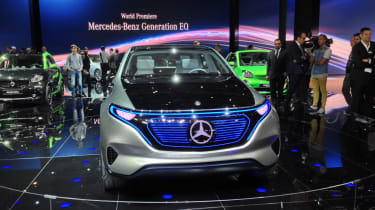 Generation EQ is designed to offer hints of Mercedes’ plans for its future electric vehicles. The cars will be based on a platform built specifically for electric cars. The platform will also be scalable, meaning that design won’t just be limited to the crossover design seen here.

The platform is also modular, so battery and power outputs can be changed, while a combination of aluminium, steel and carbon fibre should mean the weight penalty from batteries is reduced.

In terms of design, the concept features few shut lines, as well as cameras for wing mirrors, hidden windscreen wipers and retractable doorhandles. The end result is a slick shape that is said to help reduce air resistance. 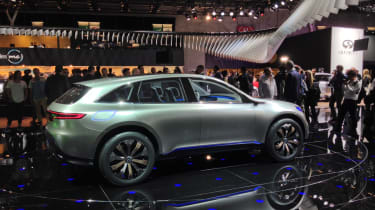 Inside, Mercedes has attempted to simplify user interfaces and functionality with as few knobs, switches and dials as possible. The steering wheel itself has touch controls built into its spokes, with OLED displays that can be swiped through.

This is paired up with a 24-inch widescreen HD display which shows everything from maps to speed and range. This display can be customised to offer as little or as much information as required.

Other technologies include ‘Car to X’ communication, which will allow the concept to speak to other cars digitally, to help increase safety. Autonomous driving assists are of course included, as are 3D maps and even GPS data that will alter the car’s driving setup based on topography and curves. 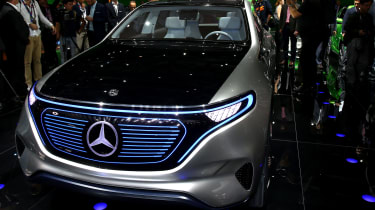 Mercedes says it will begin to build a complete ecosystem around its EQ brand. This will include the likes of wallboxes and charging services as well as of course vehicles based on the concept you see here.

Mercedes’ new EQ line-up will sit alongside the company’s current crop of hatchbacks, saloons, coupes, convertibles and SUVs and will spawn its own line-up of similar of variants that will be pure electric vehicles.

All EQ models will be developed as full EVs from the outset rather than regular internal combustion engined cars converted to electric power. With the first Mercedes EQ model due in 2018, the German firm claims it will have a complete family of fully electric vehicles in production and available to buy within five years of the original going on sale.

By 2025 Mercedes expects between 15 and 25 per cent of it entire portfolio to be represented by pure electric vehicles. In 2017 Mercedes will have 10 plug-in hybrids in its range. 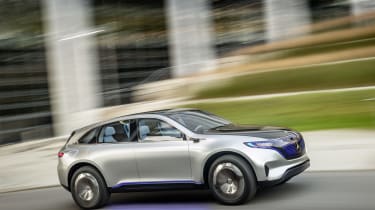 In Mercedes’ eyes its EQ customers will also be very different customers to the ones it has today. To this end it is looking at how it will market, sell and maintains the EQ cars.

The company hasn’t ruled selling the EQ models online and is looking at different ownership models for its customers too. However, there is a strong possibility that bespoke Mercedes EQ dealerships will also be built to sell the range of electric vehicles. Mercedes is also looking at pay-per-kilometre schemes, where rather than owner a specific Mercedes EQ you own access to the car you need. Although it thinks full car sharing is at least 20 years away. 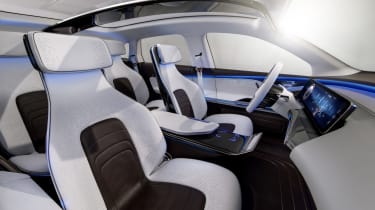 The EQ range of Mercedes will be built in the company’s existing factories, with no new plants on the agenda to accommodate the expansion. Mercedes will continue to build all the batteries for its EV range of cars.

In terms of cost, the first EQ model will be priced inline with the a fully loaded GLC model at circa £50,000.