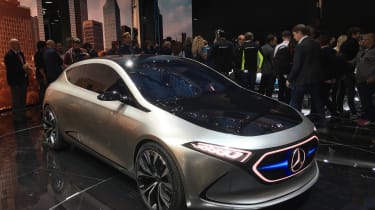 This is the Mercedes-Benz ‘Concept EQA’, the clearest indication yet as to the appearance of the next A-class, but also a shapely reminder that the truly viable mainstream all-electric hatchback is very nearly upon us.

It’s the latest concept from Mercedes’ ‘Electric Intelligence’ (EQ) sub brand, that aims to offer a range of products and services connected with electric mobility. Mercedes-Benz showed the first Concept EQ at the Paris Show in 2016, and that SUV-crossover-coupe model is due for production in 2019.

Powered by two electric motors, one for each axle, the Concept EQA is said to offer around 270bhp in its most potent form, while offering a range of around 250-miles. The lithium-ion ‘pouch cell’ batteries – with a total capacity of 60kWh – are mounted low in the floor between the axles, and made by Deutsche Accumotive, a subsidiary of the Daimler Group. They can be charged either from a wallbox or via an inductive method, and Mercedes claims that when rapid charged they can provide a 100km range in under 10 minutes. With up to 369lb-ft on offer, the 0-62mph time is expected to be a scant five seconds.

Mercedes has already shown a concept for the next A-class – a small saloon, the Concept A, debuted at the Shanghai show earlier this year. The EQA hatchback continues that theme with the next evolution of the ‘Sensual Purity’ design language that’s seen the firm move away from straight lines and creases and embrace curves once again. Although the concept retains a traditional radiator grille shape at the front end, the black panel changes to reflect what mode the car is running in: for Sport mode it’s a flaming wing; in Sport Plus the grille ‘aperture’ is filled with the vertical ‘Panamerica’ bars, as seen in the mouth of the AMG GT. There’s also a digital representation of the three-pointed star. Incidentally, those different driving modes also vary the amount of torque distributed between the front and rear axles, thereby changing the dynamic qualities of the chassis.

Running on typically large (20-inch) wheels, so beloved of concept car designers, the EQA’s headlamps are ‘laser fibre lights’. Instead of diodes, these are strands of fibre optic cable with a ‘laser-activated medium’ inside them.

It’s unlikely all these features will make production in the next A-class, but if the range, power, charging and performance claims are met, the electric hot hatch will be very much a reality – and sooner rather than later.