Forging its own path in luxury motoring, this Maybach concept is a three-box SUV… 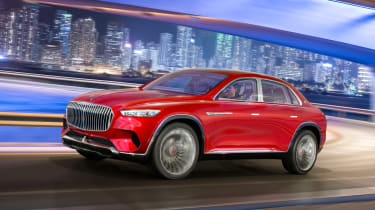 Mercedes-Maybach has revealed its most opulent concept car yet in the form of the ‘Vision Mercedes-Maybach Ultimate Luxury’. Unveiled at the Beijing motor show, the concept has obviously been designed with Eastern tastes in mind, but look into some of the details and it might give a clue as to the future of Maybach design.

It’s impossible to ignore that this is a four-door saloon SUV, a type of car that few manufacturers have attempted and even fewer, if any, have succeeded with. The traditional three-box shape has been designed incorporating Mercedes’ new, pared-back surfacing technique, but with new Maybach-specific details that hark back to the marque’s illustrious past. One such detail is the ‘spine’, as also used by Bugatti, which references the centrally hinged bonnet opening of cars from the ’30s and ’40s.

> Click here for our review of the Rolls Royce Phantom

Its SUV elements are all new-age design, though, the oblong wheelarches finished in a combination of chrome brightwork and gloss black. 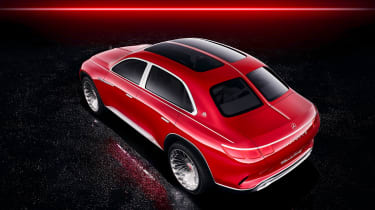 Inside, the Maybach incorporates current Mercedes elements, such as the twin 12.3-inch screen arrangement, but in a more luxurious context typical of a concept car. The wide central console is connected to an almost architectural dash by two, near-horizontal braces. A concept car this may be, but we expect some of this dash architecture to make its way into future models such as the incoming Maybach SUV.

Under the bright red skin is an electric drivetrain comprising four compact electric motors and an 80kWh battery pack that produce a combined 738bhp. Vision Ultimate Luxury should reach up to 310 miles on the NEDC cycle, although being a concept, these figures are difficult to verify.

Mercedes-Maybach has not given any indication of this concept reaching production, and despite the Chinese appetite for all forms of SUV, the Ultimate Luxury is likely just a statement of intent for what we might see from the luxury brand in the next few years.