We catch the faster Mercedes ever made testing at the 'Ring 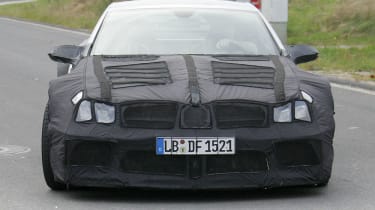 Likely to be the fastest production Mercedes ever built, the new car is rumoured to be named SLC – a name that might also hint to the car’s unretractable roof and reminiscent of the 1980s SL’s tin-topped brother. But unlike that model, the new SLC will be massively pimped-up by Mercedes’ in-house tuner AMG who will do lots of additional modifications to the SL, including fitting enormously wide arches, additional air-intakes in the carbonfibre hood and huge magnesium wheels.

The roof on this SL has been converted into a fixed coupe roof, also crafted in carbonfibre to lower the SLC’s centre of gravity and further reduce weight.