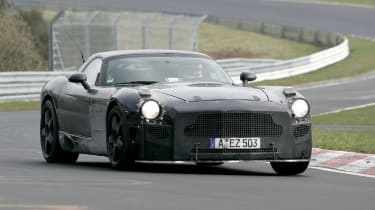 Here is a set of photos of a test mule for the Mercedes Gullwing car, undergoing handling-tests on the German Nurburgring lead by a group of AMG engineers. Back in July last year, AMG had released a small statement which announced that Mercedes and McLaren had discontinued their co-operation on the development of a smaller mid-engined SLR follow up known as the McLaren F2, and Mercedes had instead chosen their own in-house performance branch AMG to build a different supercar, known as the Gullwing car. However, since AMG doesn't manufacturer cars, they enlisted their partner in Deutsche Tourenwagon Masters (DTM) championship, HWA Racing, to help develop the new sportscar. HWA Racing was created by AMG co-founder Hans-Werner Aufrecht as Mercedes' official racing team.

The proportions of this prototype would appear to put to rest any of the McLaren F2 mid-engine rumours that had been swirling around Mercedes’ next super car effort. The mule uses some Dodge Viper body panels at the rear, but any Viper similarities end there, as this Gullwing car mule has a longer wheelbase right around 106-inches. The wheelbase of this prototype closely matches that of the SLR, and it clearly displays a long hood and cab-rearward stance.

Despite previous reports of the Gullwing car being a smaller SLR, based on the R230 SL class platform, it now seems unlikely judging by the overall dimensions of this test mule. As a result, some uncertainty as to the true nature of this vehicle is starting to circulate. For example, we've read some theories of a possible Maybach coupe or SLR replacement but they seem like a bit of a reach.

The source of the confusion comes from the first spy photos of the Gullwing car which showed a suspicious looking R230 SL-Class wearing dramatic body treatments which suggested a super high performance vehicle. Instead, it is our interpretation that the highly modified SL was just a host body for the purpose of engine testing. Which engine they were testing, however, remains to be confirmed.