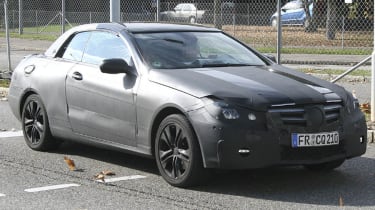 This is the successor to Mercedes' convertible CLK, which has been knocking around for around six years now. Rumour has it that the CLK is set to be renamed the E-class coupe, in-line with the car it's always positioned itself as - despite being almost identical in size to the Audi A5 and BMW 3-series coupe.

In a move aping BMW's with the open-top 3, the new 'CLK' will replace the fabric roof of the outgoing car with a folding hard-top, in order to keep up with current market trends. Judging by these photos, it seems to be a much tidier design than a lot of coupe-convertibles, with a neat rear end that features rear lights in keeping with the rest of the range, including the new CLC.

Prices should kick off around £30k with engines ranging from 4-cylinder petrols right up to a 6.2-litre V8 AMG version (with the possibility of a Black series iteration for the coupe). There'll be some big-selling diesels in between. If you want to buy one, you should have until summer 2009 to save up.