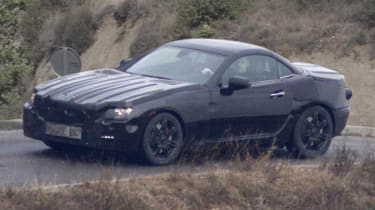 Mercedes is out testing its third generation SLK roadster. The current model has been with us five years now, launching in 2004. However it received a few tweaks last year to bring it up to date, meaning an all-new version is a while off yet. A 2011 launch seems probable, the mk2 echoing the original SLK's seven-year lifespan.

It's tricky to tell what the changes will be, the model in these pictures being a heavily disguised early testing mule. From what can be seen of the front end, though, and especially the headlights, it looks like the new SLK could be little plainer than the current car. Whereas the mk2 SLK is noted for its F1-influenced front grille and pointed snout, the new roadster looks like it will be more akin to the C-class with its square jaw and bigger lights. The side mirrors look more boxy, too, and are door mounted.

Engines wise, the range is likely to be similar to the current one, kicking off with an entry-level four-pot offering around 180bhp and topping out with a ballsy AMG version. However this may differ from the current, 355bhp V8 SLK55 and be more in tune with AMG's new cleaner attitude. The tuning firm has announced it is taking itself out of the German horsepower wars with higher bhp per litre figures and more efficient performance the goal. The all-new SLK AMG could be one of the first cars to benefit.

You can read about the Long-term Mercedes SLK350 on the evo Fast Fleet.