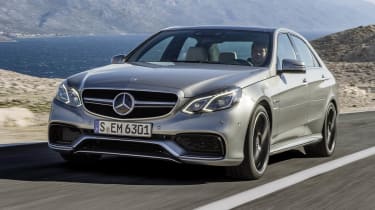 The Mercedes-Benz E63 S 4MATIC AMG. It’s the extra-hot 577bhp S edition of Merc’s 2013 E63, but not in the rear-wheel drive form in which it will be sold in the UK. Instead, we were offered a drive in the 4MATIC (owner of an extraordinary 3.6sec 0-62mph time). The shock was how much less impressive its RWD counterpart seemed after driving the E63 S 4MATIC.

In a market influenced over many years by the persistence of Audi‘s  ‘quattro‘ philosophy, Mercedes, and even BMW, are finally being forced to present four-wheel drive as a performance additive rather than an all-season safety net. This means that Merc’s familiar 4MATIC system gets a substantial reboot for its debut on the E63 with a heavily rear-biased and fixed 33/67 torque split and the addition of a locking rear differential for the S, all contributing to that spectacular, supercar-baiting 0-62mph stat.

In S form, with tweaked boost pressure, AMG’s 5.5-litre biturbo V8 supplements its 577bhp at 5500rpm with 590lb ft of torque delivered as a slab between 1750 and 5000rpm. And, as before, the Speedshift MCT 7-speed auto transmission has multiple modes ranging from C (Controlled Efficiency with Eco Stop-Start) through Sport and Sport+ to fully manual control with the steering wheel paddles.

Making 4MATIC more AMG-friendly has meant tailoring the 3-stage ESP and, in Sport Handing mode, allowing it to perform selective braking on individual wheels to enhance agility and reduce understeer. The all-drive hardware adds just 70 kilos to the E63’s weight but, because the propeller shaft to the front axle is routed to the right hand side of the engine, it takes up the space that would otherwise be occupied by the steering column in a right-hand drive car, making it LHD only. Suspension is by steel coils at the front and self-levelling air struts at the rear. The electronic damping has Comfort, Sport and Sport+ settings.

A revelation. Driving a regular E63 beforehand only served to highlight the rear-drive car’s limitations – never more obvious than on the faster, bumpier sections of the test route where big throttle inputs were treated to constant, power-quelling interventions from the stability and traction electronics unless they were disabled. Unshackled, of course, the E63’s rear rubber is yours to burn if you’re in the mood. On the same roads in the E63 S 4MATIC, there were no disruptions, just a hugely rewarding sense of hard-wired connection between the angle of the throttle and the degree of force burying your spine in the backrest. And switching off the electronics has minimal effect. When it comes to the efficient conversion of power to pace on anything other than perfectly smooth roads, the 4MATIC leaves the rear-drive E63 hobbled and a little soggy in its wake.  Because the differences run deeper than mere traction. The 4MATIC, despite its 70 kilo weight penalty, gives the impression of being lighter and lither than the rear-driver. It turns in more keenly and with less initial understeer, its responses feel cleaner and more alert and the electro-mechanical steering, while just as short of genuine feel, is pleasingly a little lighter and crisper.

It all makes delivering 577bhp with a true, unmolested V8 war cry that simply drowns out the acoustically-enhaced efforts of some rivals a genuine thrill to exploit.

Despite the continuing comparative tardiness of Merc’s 7-speed auto (ZF’s 8-speed auto aces it in all areas), in a re-run of the supersaloon drag race video featured on this website (click here to see it), I reckon the E63 S 4MATIC would murder the Porsche Panamera and Jaguar XFR and, most significantly, nose ahead of the previously all-conquering BMW M5. And that’s in a straight line. The travesty of the UK no-show grows ever-more frustrating.

In common with the rest of the refreshed E-Class range, the AMGs get softer-edged styling, more kit, lower consumption and emissions, enhanced lighting and driver-aid tech. The standard steel brakes are great but the optional carbon ceramics feel just as good under foot. Mercedes UK is currently evaluating the viability of bringing the left-hooker E63 S 4MATIC to the UK. If the demand is there, it will make the necessary provisions. We’ll get our vote in early.