Still not a driver’s car like a 5-series, but the E-class hits the mark in almost every other area 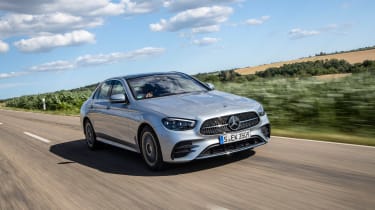 Mercedes-Benz describes the E-class as being the ‘heart of the brand’, and with a lineage you can trace back to the 1930s it has heritage like few other models in the range. It’s also gained a new look for 2020, most notably through slimmer headlights and tail lights, the ditching of the old multi-bar grille throughout the range, and a range of new exterior colours and interior trim finishes.

AMGs will follow in due course so in the meantime we’ve tried the next best thing, the new E450 fitted with the in-line six already rolled out across several other models. It might not make the E-class a supersaloon, but having enjoyed the six-pot in other models, it could be a worthwhile addition to the E-class. 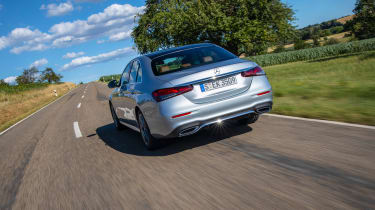 Mercedes’ M256 3-litre in-line six is a new arrival in the non-AMG E-class range, having previously appeared in other models such as the CLS and GLE. In this iteration it develops 362bhp from 5500 to 6100rpm – with a 21bhp contribution from the mild-hybrid set-up – and 369lb ft of torque between 1600 and 4500rpm, the EQ Boost system providing 184lb ft in certain situations.

Power is sent to all four wheels through a nine-speed automatic transmission, and the collective efforts result in a 5.0sec 0-62mph time and an electronically limited top speed of 155mph. Given an 1865kg kerb weight, that’s not bad going, while the hybrid’s other contribution beyond an extra power and torque boost is combined consumption of 29.5mpg and CO2 of 216g/km.

The economy certainly doesn’t seem realistic – in a couple of hours of mixed use we saw an indicated 33.6mpg, though it’s fair to say owners covering big miles may still be inclined to opt for the E400d, with its 4.9sec 0-62mph time and 46mpg claimed economy. 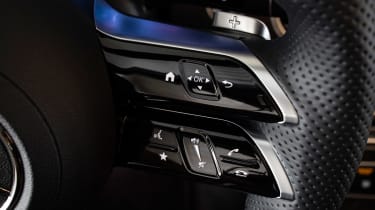 Many of the E-class updates have a technological focus. One of the most significant is a new steering wheel with split spokes and capacitive touch controls on each spoke. The left upper spoke operates the left-hand screen (10.25-inch screens are standard, 12.3-inch optional) and the right upper spoke the screen on the right, allowing you to scroll through menus, and select options. Spokes below these contain the cruise control and telephone functions.

The new wheel also uses capacitive feedback rather than steering torque for its driving-assistance functions, which makes the car slightly friendlier to use in its semi-autonomous highway driving mode, as simply having your hands on the wheel, rather than making an actual input, is enough to reassure the electronics you’re still in control.

As a nod to the upcoming dystopia, the new E-class also includes a system called Urban Guard, which rolls in an anti-theft alarm, tow-away protection, and the provision for theft and parking collision detection – the latter alerting an owner if the car is bumped while they’re away. The system has a tracking function too to help locate it in the event of theft. 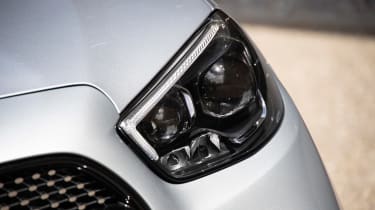 The sense of calm you get from settling into the E-class is, one imagines, much the same as you’d have got doing the same with a W123 in the 1970s if you were more used to less prestigious marques. However much the products have changed in the meantime, there’s something about Mercedes’ midsize model, particularly in this latest generation, that has enduring appeal from the moment you shut the door.

The latest spruce-up hasn’t made any changes fundamental to the user experience. The new steering wheel looks great but feels perhaps a touch too chunky in the palms, and while the touch-sensitive controls on the spokes actually work well enough, the uniform piano black plastic actually seems like a step backwards in terms of tactile quality.

The rest of it though is more or less spot-on. Quality is better here than in smaller Mercedes (there are no trim jiggles, most notably), the seats are comfortable, MBUX continues to work well even if some displays are a little cluttered, and the general ambience continues to feel more like that of a small S-class than a large C-class. 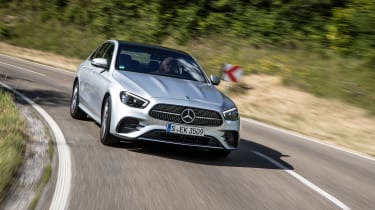 It’s a shame most will (for understandable reasons) continue to buy the diesels too, as the petrol 3-litre in-line six is about as fit for purpose as you could hope for in a car such as this. It’s creamily smooth, has comfortable reserves of power and torque and the kind of response that lets you deploy exactly as much as you need, is basically silent at a cruise but tuneful when extended, and gearchanges are imperceptible in normal use but responsive when you take control manually.

The chassis doesn’t quite have the keenness of that of a 5-series, but even in this AMG Line configuration on 19-inch wheels it rides calmly on the optional Air Body Control suspension, only really thudding (as air suspension often tends to) through fairly sharp ridges. Yet it still handles neatly, shrugging off some (but not all) of that hefty kerb weight and gripping hard even as the non-performance rubber begins to squeal.

The steering is precise and predictable, just like the drivetrain, so it’s a very intuitive car to drive, and the brakes are similarly well-judged. You’d struggle to call a brisk drive in the E450 entertaining, but it doesn’t feel like there’s much that would phase it, and the all-wheel-drive system is less rear-biased than in dedicated AMG models so confidence-inspiring traction is the order of the day even when the road surface or weather conditions deteriorate.

The aforementioned 5-series will be the one to go for in terms of driver appeal if both appear on your company car list, but the E450 has the edge if your main priority is to soothe away the stresses and strains of the day. 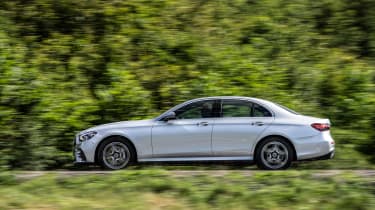 UK pricing and full specification is yet to be confirmed for the new E-class range, but it’s worth noting that our particular test car, a German-registered E450 with a fairly long roster of options, somehow clocked in at almost €100,000 (or around £90,000).

Throwing caution to the wind with the BMW configurator, we couldn’t get a regular, non-M5 5-series above £75,000, while just under £80k gets the impressively capable Audi S6 Vorsprung, so it’s clear that venturing deep into Mercedes’ options list still has a certain degree of financial peril.

And it’s the 5-series and A6 (or S6, if you fancy it) that we’d naturally suggest as rivals. The BMW and Mercedes are the most natural driver’s cars in their humbler specifications, with the A6 lacking their fluency and intuitive controls until you get to S and RS models – at which point they’re transformed into surprisingly involving machines. The 5-series still plays the role of sports saloon the best, but the E-class isn’t far behind, and counters with a more inviting cabin and even more relaxed demeanour on the move.