Now in its fourth iteration, the new Mercedes GLE has plenty rivals to keep on top of in its ever expanding class 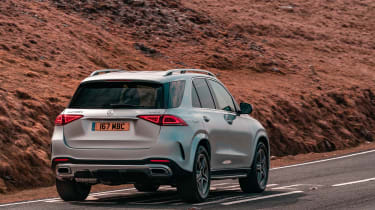 The year was 1997, Titanic broke box office records and Mercedes-Benz created the luxury SUV. Sure, luxury off-roaders such as the Range Rover had existed for years, but none had yet been so brazen (or insightful) to admit buyers didn’t give a damn about actual off-roading. Mercedes knew this, so didn’t bother weighing that original ML down with locking differentials or dedicated off-road components, in the process laying the foundation for what’s now a central segment for all the premium players.

Over 20 years later, the market is no less intrigued by this type of luxury SUV, and still just as heartbroken (spoiler alert) that Rose didn’t make room for Jack on that door. The difference in 2019 is the sheer variety of rivals this latest fourth-generation GLE has to compete with, from both traditional competitors, and more specialised offerings.

So can this new model, fitted here with Mercedes’ deeply impressive in-line six-cylinder diesel engine, stay afloat in its crowded corner of the market, or better yet innovate like its predecessor once did?

Arguably the GLE400d’s biggest asset is its 3-litre in-line six diesel. It’s an immensely refined unit, yet somehow retains a deftly balanced character rare in something as mundane as a six-pot drinking from the black pump. Power is rated at 325bhp, which is impressive enough, but it’s the 517lb ft of torque between 1200 and 3000rpm that drives the near 2.3-ton SUV with a level of urge that’s almost comical. It’s no E400d, that feels borderline-AMG fast, instead the straight-six makes the GLE400d never feel anything less than well endowed.

Connected to this excellent engine is a nine-speed auto, which despite its plethora of ratios is rarely confused at either low or high speeds. It’s also very smooth between shifts, and reacts to paddle inputs as briskly as one might expect for this type of car. Performance is strong for a non-AMG model, with 62mph reached in 5.8sec, only 0.6sec slower than the much-hyped and two turbo-stronger BMW X5 M50d. 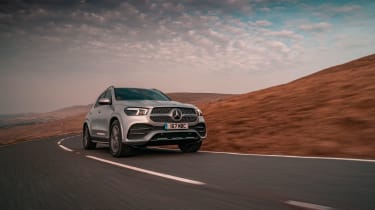 The GLE’s body is all-new for this generation and sits longer, wider and taller than before. The growth in length has also coincided with an 80mm increase in wheelbase, leading to some pert, aggressive proportions with short overhangs all round. It’s also around 50mm taller than an equivalent BMW X5, something reflected in the substantial climb just to get into the driver’s seat.

Despite the GLE’s growth, its body-in-white is largely the same weight as the previous-generation model’s, although extra equipment adds up to a car that in this GLE400d form nearly tips 2.3 ton. Standard on all GLEs, bar the entry-level GLE300d, is adaptive air suspension, while all UK models are exclusively available in AMG-line trim, with an understated 20-inch wheel as standard and 22s as an option (welcome to 2019). Despite Mercedes’ proliferation of mild-hybrid applications throughout a majority of its large car range, all diesel GLEs do without any form of hybridisation, mild or otherwise (although all petrol models do feature a 48V system).

The GLE’s MBUX infotainment system dominates the interior, with Mercedes’ usual dual-screen arrangement perched atop the steep, but well-built dashboard. It’s not the most intuitive system initially, but with acclimatisation it quickly falls to hand, and is far more user-friendly than previous Mercedes systems. Notable highlights include the augmented reality satnav, which although initially distracting, does clarify the intended route quite nicely around complex junctions. Build quality is excellent, although the plasticky leather that’s wrapped around pretty much every interior surface doesn’t feel as sumptuous or waxy as that found in rivals from Volvo or BMW. 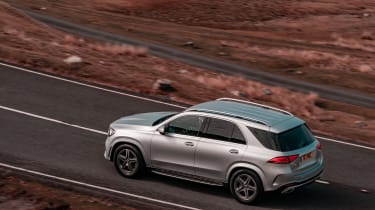 You might have seen the expression ‘it hides its weight’ when reading a review of SUVs such as the Porsche Cayenne or BMW X5. The same does not apply here. The GLE is big, and feels it on the road, exaggerated by its towering dash and seating position that feels higher than its rivals this side of a Range Rover Sport. This is no lifted E-class, rather a tall, upright and quite traditional-feeling SUV that seems to have no interest in even feigning driver interaction.

This type of focus is usually commendable, hence why Range Rovers often find favour here, but whereas they ride with a tangible sophistication, the GLE hobbles along the road with a stiff-legged and somewhat unrefined overall ride quality. Raise your speed and the GLE400d’s standard air springs do settle, but with added pace the physical momentum of all that weight starts to chip away at body control, knocking your confidence in how much dynamic ability the GLE actually has. The steering is completely numb and has a ratio that feels a tad too fast for such a large car; sharp inputs cause the body to rock as the suspension struggles to control the mass being thrown around. Overall, despite all that contemporary technology underneath, the GLE actually feels quite old-fashioned.

Of course, the relative lack of handling prowess is somewhat made up for by the powertrain, which shines from within the GLE’s dynamic package like the molten chocolate centre of a disappointing pudding. It overlays the somewhat wooden driving characteristics with an addictive power delivery and unimpeachable refinement. The cabin is isolating and refined too, with little in the way of wind noise, and only the huge tyres create a distant roar to upset the serenity.

In this relatively sensible diesel application, the GLE’s handling issues don’t present such a glaring problem, but there will be some work required if the sportier GLE53, and incoming GLE63 AMG models have a hope of competing with the best performance SUVs in the segment. 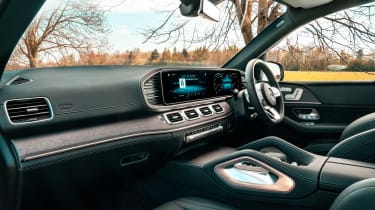 Prices for this GLE400d start at £62,685 – a large sum perhaps, but then the GLE is a substantial car, so has no trouble justifying its price point. Standard equipment is strong, with the aforementioned standard-fit AMG-line trim, which includes 20-inch wheels, LED headlights, leather trim, the dual-screen MBUX infotainment system with full navigation, air suspension, the list goes on...

Options are bundled into packages, the initial Premium package combining upgraded parking assists, excellent multibeam LED headlights and memory functions for the electric seats. Go for the Premium Plus package and you’ll pick up a panoramic roof, top-level keyless functions and an upgraded Burmester stereo. A pair of tiny third-row seats are also available if you wish to torture yourself with more than three kids in the car at once.

The BMW X5 is a GLE’s closest rival and starts at £61,140 in 30d M Sport trim. At that price, it does with a lesser 265bhp diesel, which lacks the Merc’s punch. Upgrade to the M50d and you’ll need to add an extra £10k to the list price, at which point the X5’s value equation starts to falter. The Range Rover Sport is priced significantly higher, starting at £73,455 for a mid-level Dynamic HSE with the 302bhp six-cylinder diesel powertrain. Go for a TDV8 with 336bhp and you’ll be spending way over £90k.

For the cost of a moderately specified GLE400d, the Audi SQ7 also comes into contention, with its impressive V8 diesel that may lack the responsiveness of the Merc’s in-line six, but punches harder with a deeply satisfying V8 burble along the way. An alternative six-cylinder Porsche Cayenne is available in three forms: the £58k Cayenne, £68k E-Hybrid and £69k Cayenne S. Both non-hybrids use considerably more fuel, and regardless of the improved efficiency, the E-Hybrid feels heavier and more compromised on road than the Mercedes.

Overall the GLE is not the most dynamic option in the class – that accolade still belongs to the Porsche Cayenne S – but it is still one worth considering thanks to that brilliant powertrain and its hewn-from-stone solidity. 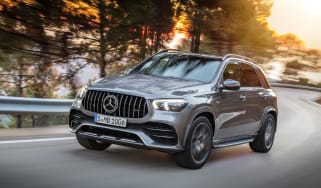