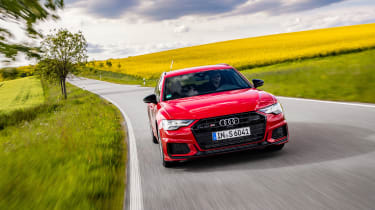 There’s life in the diesel engine yet, it seems. Not just because for cars the size of the new Audi S6, a long range still makes a lot of sense – around 1000km, or over 600 miles in this particular case – but because its performance characteristics are also quite desirable in a certain class of car.

So as you might have guessed, Audi’s latest S6 uses diesel, rather than petrol power. A regressive step for some, but for others, a move that will finally unlock S-level performance without paying too great a penalty at the pumps. Tested here in desirable Avant form, how does it fare?

> Click here for our review of the Audi S7 TDI

The transmission has changed too, now using an eight-speed Tiptronic – read torque-converter auto – rather than a seven-speed S-tronic dual-clutch. The oft-repeated 0-62mph time has nevertheless taken a slight step backwards due to the lower output, now at 5.0sec for the saloon and 5.1sec for the Avant, compared to 4.4sec and 4.6sec before. Top speed remains an electronically limited 155mph. 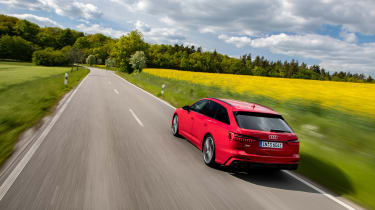 The benefit, of course, is economy. Like-for-like figures are difficult to come by as the new TDI’s 36.2mpg combined for the saloon and 35.3mpg for the Avant are recorded on the new, tougher WLTP schedule, compared to the petrol car’s 30.1/29.4mpg figures on NEDC. You can expect the gulf to be greater in real-world driving.

The S6 is the latest Audi to benefit from the company’s 48V micro-hybrid drivetrain which allows for quick engine off/on behaviour, coasting and energy recuperation and, following the SQ7, the latest to receive an electric compressor to boost low-revs throttle response. 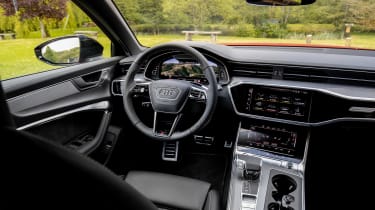 Any concerns that a diesel engine may not be the right fit for a car badged ‘S6’ fade away the first time you sink the throttle pedal to its stop. On paper it may be a shade slower to 62mph, but the relentless surge of power, muted woofle from the V6 and swift cog-swapping from the eight-speed auto result in a powertrain that delivers precisely the kind of significant, easily accessible performance an S-badged Audi should.

You do of course lack a strident exhaust note and the continued rush of acceleration to a higher red line that a petrol might offer, but those will always remain available in the more serious RS6. At this level, the TDI just seems to better suit the S6’s character, and if you knock off the artificially generated, V8-like note played in sport mode, the V6’s natural sound is far from unpleasant.

> Click here for our review of the Mercedes-AMG E53

There are a couple of small black marks against the powertrain: firstly, that electric compressor doesn’t seem to do a great deal for low-revs response, and the engine’s best work is still done above 2000rpm. 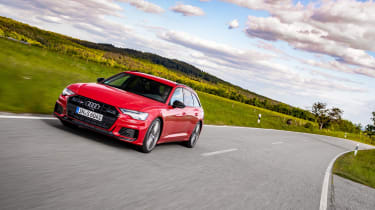 Secondly, the auto ’box also contributes to drivetrain lag down low as it works out which gear might be most appropriate for your throttle input, gathers itself for a moment, and then unleashes a slightly unseemly wallop of torque in your intended direction. Keep the revs in the mid-range and pick the gears yourself in manual mode, and neither issue presents itself.

More surprising than the satisfaction of the diesel is the chassis. Rarely an Audi strong point, the S6 Avant TDI proves agile, and even engaging to feed down a twisty road.

All-wheel steering plays a big part, seemingly shedding hundreds of kilos and several inches from the car in every direction. It shrinks the car when parking or driving around town, obviously, but it also makes the S6 amusingly agile and accurate for such a large, heavy (2020kg) car and effectively eliminates understeer at road-going speeds.

It’s backed up by something all-wheel steer Audis have thus far lacked: decent steering. Weighting and response are both far more natural here than we’ve experienced with the system in the past and it makes all the difference for enjoyment, even if there’s little actual feedback.

Ride quality is more difficult to assess given the smooth nature of the German roads on the test – while it seemed to handle rougher sections fine on the 21-inch optional wheels, UK roads do bring out the worst in otherwise pliant vehicles – but general refinement, quality and comfort is, as we’ve come to expect from the A6 platform, excellent.. 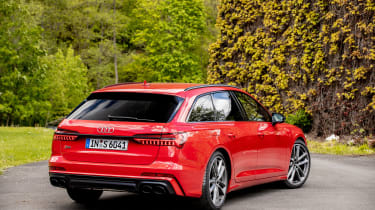 Handily, the company also suggests a list of rivals the new car is targeted at, including both petrol and diesel variants in both saloon and estate form. The petrols are from BMW and Mercedes-AMG, with the 540i xDrive M Sport and E53 4Matic respectively, while Audi throws in the Jaguar XF S 3.0d in both saloon and Sportbrake form as an equivalent diesel rival.

The £53,035 XF (£2k more for the Sportbrake) is probably a little under-dressed for this party, sending its power to the rear wheels alone and 48bhp shy of the S6, though it does match its 516lb ft torque figure and delivers it 1000rpm sooner despite the lack of fancy electric turbos and mild-hybrid set-ups – and it’s cheaper too, of course. It’s also a more fluid driving partner, but lacks the Audi’s sense of integrity and outright agility.

The £53,530 BMW and £64,280 Mercedes-AMG (approximately £2k more for each estate) are very different propositions, the BMW being less overtly sporty than the S6 or AMG but delivering up to 30.7mpg on the WLTP cycle, despite being a petrol model. The AMG on the other hand is hybrid-assisted and its straight-six is creamy smooth, while the E-class interior seems less clinical than those of its German rivals.