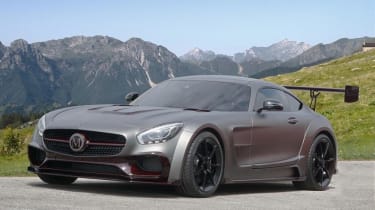 Mansory, purveyor of extravagantly-styled versions of popular luxury and supercars, has turned its attention to Mercedes’ current range-topper, the AMG GTs sports car.

While this would ordinarily be the cue for much wailing and gnashing of teeth, the end result – described as a one-off model following its take on the GT S at the Geneva motor show – is surprisingly tasteful, with more than a passing resemblance to the GT3 car that finished first at this year’s Nurburgring 24 Hours.

Much of that is down to this latest car’s most prominent feature: a large rear wing, twinned with a lower diffuser and wide bodywork to hide the 9.5x21in seven-spoke front wheels and their 21in diameter, 10.5in-wide equivalents the rear.

These are wrapped in 245/35 ZR21 tyres up front and 305/25 ZR21s at the rear, while the whole car sits on lowered suspension for a stance that, if not quite as aggressive as the race car, at least adds to the motorsport look. 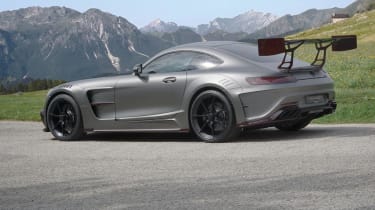 While Mansory isn’t known for its restraint, the one-off’s paint scheme is fairly understated. Most notable are an option chosen by the car’s owner, where all visible carbonfibre elements are painted in a ruby red shade.

Thankfully, Mansory has also seen fit to upgrade the AMG GT’s performance to match its styling: a pair of larger turbochargers feed extra air into the cylinders while a sports exhaust system extracts gases at a similarly high rate. Combined with revisions to the engine mapping, the new peak output is 720bhp, up from the standard 503bhp.

Interior changes include a carbonfibre inlay to the sports steering wheel, and aluminum-finished pedals. The seats have also been retrimmed – in a dubiously-titled ‘carbon fabric’ – while embroidered logos and illuminated door sills finish off the alterations.