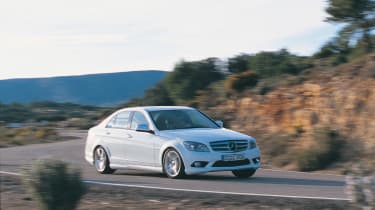 There was plenty of talk about ‘virtual cars’ at the launch of Mercedes’ bigger, chunkier new C-class in Spain, though some disagreement about which direction the discussion should take.

From Mercedes’ perspective, it was all about the world’s first digital prototype. Before the conventional prototypes were built – and for the record there were 280 that covered a mind-boggling 140 million test miles, a record even for Mercedes – the engineers already had a near-perfect idea of how they would feel to drive, thanks to the ‘virtual prototype’. And no, they didn’t knock up a program with Gran Turismo’s Kazunori Yamauchi to run on a PS3. Nor did anyone dare to be so glib at the press briefing, tempting as it was. The digital mock-up, all 2130 gigabytes of it, was used for 5500 crash test simulations, intensive ride and handling analysis, NVH tuning, aerodynamic development and climate control tests. Undoubtedly a worthy use of silicon and electricity.

All well and good, but the angle I had in mind for the discussions was a little closer to the Jamiroquai track ‘Virtual Insanity’. In other words, when would we see the AMG version, where would it check in on the ‘bad craziness’ scale, and just how many shades of ordure was it likely to beat out of BMW’s imminent V8-engined M3? Naturally, our hosts were a little guarded on the subject, though they did reveal this: it will have the 6.2-litre naturally aspirated V8 currently in the CLK (circa 475bhp), it will be launched in the first half of 2008 and, unlike AMGs of present and past, its pricing and spec will place it closer to the orbit of the mainstream models, thereby giving the range a more integrated feel.

But an M3 mauler? For the time being we’ll have to glean what we can from the sportiest version of the new C-class, the 268bhp, seven-speed auto C350 Avantgarde. Its UK-specific equivalent, the C350 Sport, goes on sale a couple of months after the roll-out of the initial model line-up launch in July. The Sport, like the Avantgarde, is instantly distinguished by its bold, simple nose treatment, with a big three-pointed star dominating the grille in a manner similar to the new CL coupe’s. The comfort-orientated SE and Elegance models get more chrome trim and finely meshed grilles with a conventional three-pointed star standing proud of the bonnet.

The contrasting treatments make the cars look startlingly different head on, though arguably the starker simplicity of the Sport sits more comfortably with the masculine, almost butch architecture of the new car, which clearly speaks the same dialect of design language as the S-class. Intriguingly, the sturdy new shape doesn’t photograph nearly as well as it looks in the metal but, when you first see it, it’s striking how successfully it re-establishes the sense of strength, solidity and durability long held as Mercedes core values.

Although based on the old C-class platform, the new car is 55mm longer and 42mm wider, so it’s more spacious inside and has a larger boot. The wheelbase is 45mm longer and the track is 44mm wider at the front, 76mm at the rear. Combined, these changes give a slightly more rearward bias to the weight distribution, with the aim of making the handling more neutral.

The rack-and-pinion steering has been sharpened up, with a six per cent more direct ratio, and while the suspension retains the same three-link MacPherson strut (front) and five-link (rear) designs, it has been completely overhauled with new lightweight components, altered geometry and new amplitude-sensitive dampers that are more compliant over small bumps to maximise comfort, but which stiffen up with bigger wheel movements and/or steering inputs. This basic ‘Agility Control’ system is entirely hydraulic, but our C350 has the optional ‘Advanced Agility’ package, which has infinitely variable electronic control for each damper and is linked to two gearshift programmes, Sport and Comfort, which also alter the throttle and transmission maps.

What’s immediately apparent is that the new C feels lighter, tauter and innately more poised than its predecessor. The 3.5-litre V6 spins sweetly and relentlessly, and is clearly strong enough to put the chassis under pressure. It doesn’t buckle; in fact, it seems to love it. Feel is superb, grip prodigious and, no matter how hard you push, the C350 refuses to come a cropper. Truth is, it enjoys being taken by the scruff of the neck and hammered. The basic tenacity and faithfulness of the chassis, massaged and focused by the electro-hydraulic damping regimes, can simply murder a twisty road. And the steering isn’t just beautifully weighted but dripping with feel. Cornering balance is just about spot on, too.

Even with the traction control left on (being a non-AMG it never fully switches off), slide the auto down a cog or two and it’s possible to enter a bend on a trailing throttle with a mild state of oversteer. Stab-correct stuff; your granny could do it. There’s definitely a feeling that the car is maybe more than an equal partner – flattering to the point you begin to doubt your own contribution. But also encouraging. With 475bhp to play with, a helping hand might not be such a bad idea. We can’t wait to find out.