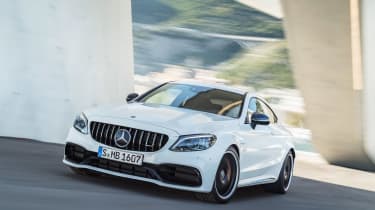 Mercedes-AMG continues to update its C-class line-up, with new range topping C63 and C63 S models revealed at the New York Motor Show complete with a new look nine-speed gearbox. Following on from the six-cylinder C43 saloon and Estate facelift, which saw it receive a little more power along with its nip and tuck, the C43 Coupe and Cabriolet updates quickly followed and now it’s the turn of the V8-powered AMG C-class, the C63, to get its midlife refresh.

Unlike the C43, however, the new C63 doesn’t receive a powerhike, with the 4-litre twin-turbo ‘hot-vee’ V8 engine still producing a formidable 469bhp and 479lb ft of torque in the regular tune and 503bhp and 516lb ft in the S models. There is, however, a rather fundemental mechanical change in the guise of a new nine-speed gearbox. Like the seven-speed item it replaces, the new unit remains an automatic gearbox with a wet clutch arrangement rather than a traditional torque-converter, or a more sophisticated double-clutch unit prefered by some rivals.

> Click here for our Super Coupe Supertest between the M4, C63S and RS5

The software controlling the engine and transmission has been upgraded, too, with gearshifts said to be faster due to better-defined ignition adjustments. AMG has also developed a multiple downshift function for the transmission. 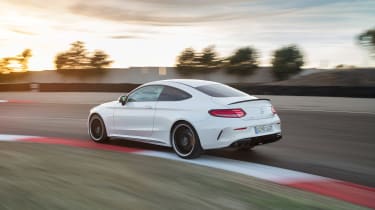 Previously only the more powerful S models were fitted with an electronically controlled limited-slip differential, while the non-S made do with a purely mechanical diff. For the updated models this changes with the more complex diff now fitted as standard to both models, although dynamic engine mounts are still only available on the C63 S.

Even with more gears, quicker changes and a more sophisticated drivetrain the C63 and C63 S don’t accelerate any quicker than before. The basic C63 saloon reaches 62mph in 4.1sec, the S saloon in 4.0sec. The estate and cabriolet derivatives are 0.1sec behind the saloon, while the coupe is the quickest of the quartet of body styles.

What has changed are the S models’ top speeds. The C63 S coupe and saloon now reach 180mph and the estate and cabriolet top 174mph. To reach those speeds before in the C63 S you needed to buy the optional AMG Driver’s Package, although all of the non-S C63s are still limited to 155mph.

The C63’s attitude can now be even further tailored to the driver’s style or whim with a new layer of driving modes. As well as the six basic modes (Slippery, Comfort, Sport, Sport+, Race and Individual), there are four further settings (Basic, Advanced, Pro and Master) that alter the throttle map, chassis settings and the ESP threshold.

You’ll be able to spot the new C63 thanks to its AMG GT R-style ‘Panamericana’ grille, instead of the silver trim stretching either side of the Mercedes logo, the new grille is made up of multiple vertical gloss-black bars. There are other visual changes, too, but they aren’t as obvious as the new radiator grille; the fins on the outer front air intakes have been redesigned and there are new twin tailpipes and more prominent diffuser at the rear. 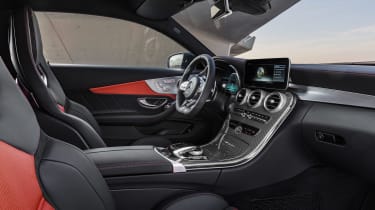 Two new sets of wheels are available, a standard 18-inch design and an optional 19-inch alternative. Both have been optimised in a wind tunnel to improve airflow around the rotating wheels and add to the car’s improved aerodynamic efficiency.

As standard, the C63 is much like before inside the most significant difference is a new AMG steering wheel with a flat bottom and perforated leather grips. However, there are plenty of new options to select from, including fully digital dials on which the driver can choose their preferred layout, and adjustable side bolsters on the upgraded seats.

You can also now choose an AMG Track Pace as an option on the non-S C63 (it comes standard on the S). This software allows you to record data when driving on a circuit. There are multiple tracks already programmed into the system but it can use the car’s GPS to log new ones.

The updates to the C63 are hardly transformative, but then the existing model was already a fast and hugely entertaining car, so not a lot needed changing. The new model goes on sale in April 2018, with customers who put their orders in early likely to take delivery in October.