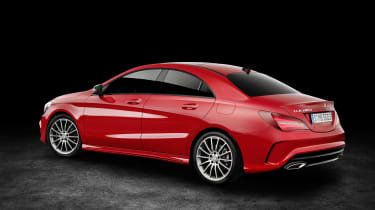 For bombastic performance you’ll have to choose the CLA AMG 45 with its 4.2-second 0-62mph time and electronically limited 155mph top speed.

Among the non-AMG models (and by that we mean the proper Affalterbach-built flagship as opposed to the AMG Line models that are included here), the CLA 250 4Matic is the quickest, using its 215bhp and 258lb ft of torque to good effect through the 4Matic system to reach 62mph in 6.4 seconds. 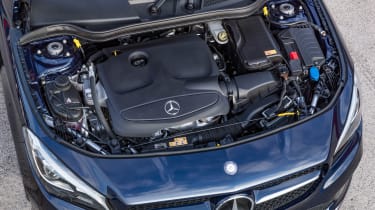 Top speeds follow the same hierarchy, the CLA 250 able to manage 155mph, the CLA 220d 144mph, CLA 200d 134mph and the CLA 180 trailing at 130mph (reaching 62mph in nine seconds flat, in manual form). All respectable enough numbers and the diesel is not as tardy as those sprint times would have you believe.

There’s sizeable, if short-lived, mid-range punch from the diesels, both the 200 and 220 CDI needing a peculiar driving style to achieve the best from them. They’re pretty rough too, Merc’s small diesel engines not offering the sort of smooth refinement that even some mainstream makers now deliver from their turbodiesels.

That makes the petrol engines more attractive; the CLA 180 might be the lightest on output at 120bhp, but it’s smooth right up to the top of its rev range - where it delivers its best. The CLA 250 4Matic will sell in single numbers in the UK, but it’s arguably the sweetest of them all; being responsive, powerful and rich in torque it’s a junior AMG in the making.