Specs and details of the Mercedes CLA45 AMG Edition 1, a launch special of the AWD sports saloon 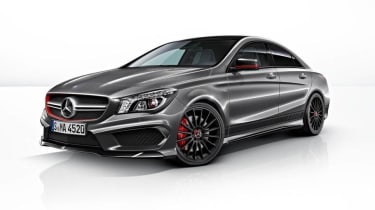 First pictures have emerged of the Mercedes CLA45 AMG Edition 1. The launch special of the four-door, four-wheel-drive AMG echoes its relation in the A-class range, the A45 AMG Edition 1. Like its hatchback sibling, it gains red detailing on the grille and side mirrors, black 19in alloy wheels with red centre caps and red and black leather seats, while there’s a fetching set of graphite side stripes running along the CLA’s doors.

Under the saloon’s truncated snout sits the same 2-litre turbocharged four-cylinder engine as the standard CLA45 AMG, with 355bhp and 332lb ft yielding a rather brisk 4.6sec 0-62 time. Power is directed to all four wheels via a seven-speed twin-clutch paddleshift gearbox.