Following the launch of the revised standard car, the tweaked E63 is put through its paces 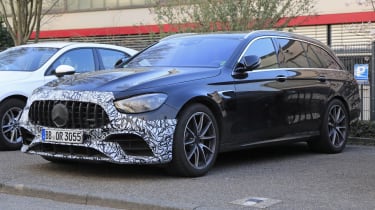 At the beginning of the month, Mercedes-Benz launched its latest take on the E-class, fettling design to bring it in line with the upcoming S-class and C-class set for launch early in 2021. The full reveal is expected in the summer, but the range-topping E63 has already been spotted undergoing tests.

Spied in Affalterbach near the performance division’s headquarters, this camouflaged test mule sports a number of changes over the current car. Most dramatic of all is the new front end, with the new E63 featuring AMG’s Panamericana grille for the first time, alongside the same redesigned headlights found on the revised standard model, and tweaked intakes – the typically AMG ribbed bonnet and flared front arches can also be found.

Tweaks at the rear are minimal in comparison, with only a fresh tail light design and slightly modified exhaust tips setting it apart from the car currently on sale. Although performance is due an upgrade, rumours point towards the adoption of a more restrictive particulate filter, making that exhaust system quieter than before.

Mercedes-AMG’s 4-litre twin-turbocharged V8 will lie under the bonnet, but as opposed to the current 563bhp and 553lb ft (604bhp and 627lb ft in the S) power output, the use of mild-hybrid tech will lift this further. New to the E63 will be a 48V mild-hybrid system, allowing for the adoption of the brand’s EQ Boost system. Not only does it increase efficiency, but it also provides models with an additional 22bhp and 184lb ft of torque – this would bring the E63 S to a maximum combined output of 626bhp and 811lb ft of torque should the system be fully primed. 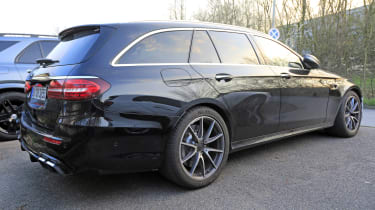 As you’d imagine, performance is likely to see an improvement, with the current 3.3sec (3.4sec for the non-S) 0-62mph sprint coming a tenth or two sooner. Top speed will remain limited to 155mph.

The cabin will also receive an upgrade, with the marque adding a new steering wheel and the very latest iteration of its MBUX infotainment system, offering drivers new features such as gesture control, augmented reality navigation and more.

Pricing and availability is yet to be announced. However, expect a reveal in summer of this year. 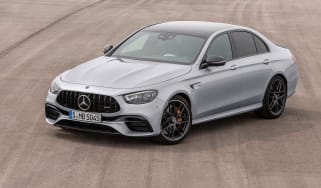