Almost all the performance but for a fraction of the price – is the 675LT really special enough to give the brain-scrambling P1 a fright? 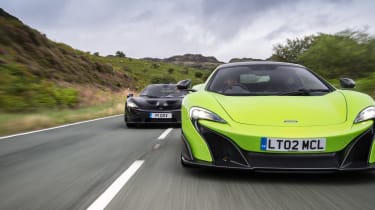 It’s evo Car of the Year 2015. The final day. We’re in Scotland, so far north that it feels lawless. Any further north and it becomes godless. We’ve been blessed with bright sunshine for three days straight, but fog is hiding the scenery this morning and photography is off the agenda. Thankfully visibility is good at road level, which means we can at least drive.

There’s just one car I haven’t tried yet: the McLaren 675LT. Its key has been like a ticket to the chocolate factory all week – damned hard to get hold of. But I’ve got it. I drop into the McLaren’s cabin, swing my feet into the footwell, pull the steering wheel towards my chest and, in that moment, completely fall for the LT. The seating position makes me feel like a Le Mans driver.

There’s a bona fide Le Mans driver just ahead of me, in fact. I slot into the line of test cars behind Marino Franchitti, who’s snared the Porsche 911 GT3 RS for this morning’s first run. My palms sweat with excitement for what I know is about to unfold. 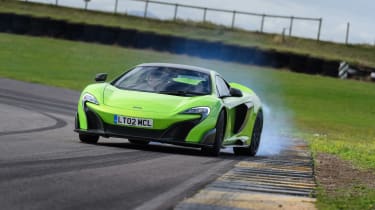 Over the next 30 miles or so, following in Marino’s tyre tracks, I drive with more commitment than ever before on the road, trusting his entry speeds and his lines through the corners. In everything the LT does – the way it grips, steers and brakes, the way it accelerates and corners and the way it sounds – there is certified perfection. If I fell for it at a standstill 30 miles ago, I’m a zealot for it now.

That blast through the far north of Scotland was the single most memorable and exciting drive of my life. I’ve thought about the 675LT, all 666bhp of it, every six seconds since that morning last September, and whenever I replay sequences from that drive to myself, I always arrive at the same question: how the hell can the P1 be any more exciting than that?

It’s ten months later. I’m at Anglesey Circuit on a grey day. We’ve spent the past hour or so photographing the P1 on track and with the job done the car’s carbonfibre pendant of a key has been tossed my way. I suddenly find myself with a P1, an empty racetrack and licence to do more or less as I please.

The jaded car hack, too seasoned to be impressed by it all. Unflustered. That’s the impression I should be trying to give. But I feel bloody nervous. I’ve been waiting several years to drive a P1 and I’d sort of written off ever getting the chance to do so. But with the key in my hand, lots of fuel in the tank and the most picturesque circuit in the country at my disposal, the moment is here.

So I get in, swinging my feet into the footwell. Just like the LT, the P1 has that prototype-racer seating position, but even more reclined. The low scuttle, the panoramic view through the windscreen. Racetracks kill all sense of straight-line acceleration, so even the likes of the Audi R8 V10 Plus or Nissan GT-R just don’t feel that fast on circuit. The first time I bury my right foot in the P1 through second, third and fourth gears, though, I’m stunned. With 903bhp the rate of acceleration is furious, with a runaway-train sense of panic.

The enormous grip through the banked hairpin, the sheer power of the brakes. The surprisingly playful and adjustable balance. Within two laps my brain is scrambling to keep ahead of the car, ahead of the corners that keep on arriving so suddenly. But I have to stop because there’s real work to be done: out on the road, 675LT behind me, inferior in every single way. 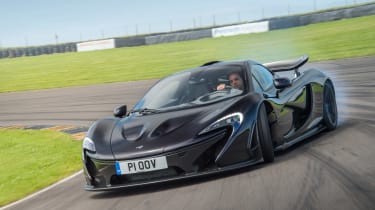 I don’t know what else I was expecting of the P1, but I can’t quite believe how raw it feels. Stones ping loudly into the underside of the carbon tub and tyres slap noisily into the road surface. The soundtrack from behind is the uncultured, tuneless din of industrial turbocharging: whooshes under load and piercing whistles from the wastegate. The car feels rigid over these bumpy roads in north Wales, dropping heavily into potholes, suspension just about rounding off the edges enough to keep it the right side of useable.

Eventually the traffic thins and the road begins to meander invitingly between hedgerows. The surface is damp with shallow rivers in places. But when else am I going to drive a P1? Rolling along at a gentle pace, I start with third gear. Hesitantly prod the throttle, then lift off again. Wimp. This time I’ll keep it pinned. With the slightest squeeze, the car launches forwards, the giant, tensioned bungee cord that connects the P1’s bumper to the horizon having just been released.

Two seconds later I have to lift off. I just can’t deploy this level of performance on this road. Not just yet, anyway. I can’t remember ever having driven a car that demands so much forethought and consideration to simply drive it in a straight line.

Over the course of the afternoon my confidence grows, more because the road surface has dried than me having got any sort of a handle on the P1’s performance. It still feels absurdly fast, with such outrageous levels of grip and such unparalleled stability, control and precision.

Amidst the frenzy of it all, one or two fully formed thoughts do crystallise. The steering is feelsome and ultra-direct, but it has very little self-centring effect, which means I have to consciously unwind lock away from every apex. And while the torque fill from the electric drivetrain (the function that uses the motor’s instant torque delivery to disguise the low-down lag of those enormous turbos) is very impressive, once you’ve got the engine spinning above 4000rpm this technology just isn’t a factor – on the road, at least.

I have no doubt this is the fastest point-to-point car I’ve ever driven on the road. Nothing else has the same ability to cut through bends and to slingshot along straights. I’m so unsettled by the whole encounter that I find myself drawing not on previous driving experiences to try to make sense of it, but on the time I flew in a stunt plane and the time I fired an assault rifle – the two experiences in my adult life that have left me jabbering and incoherent.

So I was right. The 675LT is going to feel completely pedestrian. I’m almost remorseful for it, for that drive we had in Scotland. I still like the seating position, though. And its cabin feels much better appointed than the P1’s. Pull away, one gearshift, two and three. Oh my, this thing sounds good. Sensational, in fact. A crisp, razor-edged note, wicked cracks from the exhaust tips on upshifts. A stirring, thrilling soundtrack that shows up the P1’s flat, noisy blare. 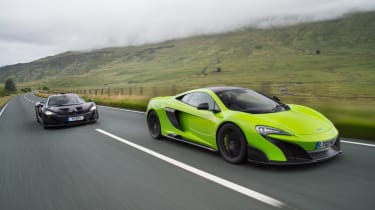 Damn, this LT feels fast. The engine needs 3500rpm, but from there it shoves the car down the road at a ballistic rate. It hardly feels any slower than the P1. I must have misremembered how quick this thing really is. Its steering is more intuitive, too, with a natural self-centring effect, and the chassis is better able to deal with big bumps and deep holes in the road.

It has the same flat-bodied, instantaneous chassis response as the P1 and the same way of digging both axles equally hard into the tarmac so that you feel suspended perfectly between them. In fact, with each steering input and with each reaction from the chassis, I become more convinced that this LT is a tauter, more cohesive and less disjointed machine than the P1.

But I’m talking fractions. Only in a back-to-back comparison to this LT can I find any real fault with the P1 dynamically and I’m willing to bet a lot of what makes the hypercar feel a touch loose is the fact that this one has covered 20,000 merciless miles in two years.

Across a weaving, cresting Welsh moorland road, the P1 doesn’t have the performance to drive away from the LT. In fact, it takes a racetrack to tease out the difference between the two, and even then it’s minimal (see left). The LT gets so close to covering the P1’s strides, and in strictly objective terms, and in deference to the huge difference in cost between them, that probably makes the less powerful car the more persuasive one. 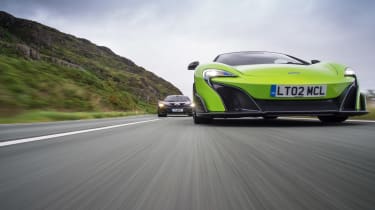 But I can’t ignore the fact that the P1 has had such a dislocating effect on me. No other car has made me feel the way the P1 does. I’m sure some of that sense of awe comes from within me, from my own understanding of what the P1 is and how valuable it is, but there’s no denying that it delivers a truly formative experience over and above the LT’s merely memorable one.

I often get asked what my favourite car is, and since evo Car of the Year 2015 my answer has always been the McLaren 675LT. But not anymore.