The all-new third generation of the Mercedes ML is quicker and greener than the model it replaces - but is it any better to drive? 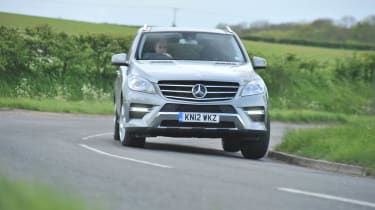 The new, third-generation Mercedes ML-Class, sampled here with the 350 Bluetec diesel engine that – barring the compellingly mad ML 63 AMG – is the quickest model in the range.

The ML has been a strong seller in the UK since the original was launched here back in 1997, and although it’s off-road ability is purely notional these days it’s still a major player in this part of the market. Prices start from £45,380 for the four-cylinder 250 Bluetec diesel, with the 350 Bluetec costing £48,490 before options.

The new ML uses Merc’s latest 3-litre V6 diesel, the ‘Blue’ in its name referring to the fact it also runs a urea injection system to reduce emissions instead of a particulate filter. From the driver’s point of view, this means that you’ll need to occasionally top up the special tank for the ‘AdBlue’ solution, accessed under the standard fuel filler flap.

The motor’s output isn’t that special by modern diesel standards, with 255bhp backed up by a solid 457lb ft of torque. That’s more than the previous ML350 CDI managed, and Mercedes also claims a vast improvement in official mpg – now 39.2mpg. Not bad at all when you consider the claimed 7.4-second 0-62mph time.

Not that the ML is an off-roader in anything other than looks, with poor ground clearance and no traction enhancing aids beyond its four-wheel drive system and standard stability control. This isn’t definitely the sort of vehicle you’d use to attack a ploughed field – for that, Mercedes offers the mighty G-Wagen.

Good in parts. The new ML feels pretty similar to the second-generation version it replaces. It’s certainly not a car that ever disguises its size or bulk – it never feels anything less than big or heavy, and it’s fair to say it’s not the sort of vehicle that enjoys being hustled along a demanding road.

The stability control system – which in common with many SUVs can’t be fully deactivated – takes a particularly dim view of any kind of slippage, positively slamming on the brakes when it detects any sort of traction failure.

At normal speeds the ML is a decent enough drive. The steering is accurate, body control is generally good and the engine’s unceasing wave of torque gives it a turn of pace that’s capable of causing a fair amount of surprise to other vehicles. The ML is also whisper-quiet at motorway cruising speeds. Sadly, bumpy roads seem to catch it out with an oscillating ride likely to turn passengers green.

It’s not as sharp a steer as the BMW X5, but there’s still lots to like about the ML’s recipe of pace, space and comfort. Mercedes is also now offering an ML250 with a 200bhp four-cylinder diesel engine that’s claimed to be capable of 44mpg, and which is £3000 cheaper.