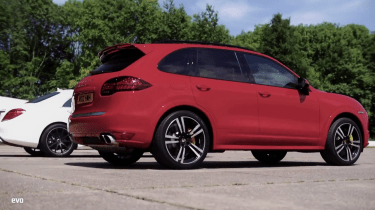 The beefy Porsche Cayenne Turbo S and sleek Mercedes S63 AMG might appear to have come from opposite ends of the luxury performance sector, but in many ways they’re actually very similar. Both are the hottest available versions of their respective models, both mix supercar performance with ultra luxury and perhaps most importantly for this test, both have thumping great twin-turbo German V8s under the bonnet.

Ok, so the Porsche’s 550bhp 4.8-litre unit might seem small compared with the Merc’s 577bhp 5.5-litre heart, but since the Cayenne Turbo S is an SUV, it has the advantage of sending power to all four wheels. The traction advantage this gives is shown with its claimed 0-62 time of 4.5secs, being just one tenth off the more powerful Merc.

The similarities don’t end there, however, because these two heavyweights also weigh in with just 30kg between them, the Merc being the lighter of the two with a kerb weight of 2185kg. We liked them both on our road tests too, both cars hiding their hefty masses with effortless performance and plenty of grip.

In a straight line however, where chassis dynamics and garish red paint jobs become invalid, the more powerful and more aerodynamic Mercedes ultimately wins. Though the four-wheel drive Porsche arrives at 30mph a full half a second quicker, the Merc still manages to impress by shooting off the line and up to 60mph in a recorded 4.4secs and taking the lead on the approach to 100mph which takes it 9.4secs.

The AMG saloon then uses all 664lb ft of torque to draw out an increasing lead over the Porsche, though the SUV does still post some impressive times. The Cayenne Turbo S reaches 60mph with a three tenth lead before passing the standing kilometre in under 23secs, but even 553lb ft of torque can’t shove the far less aero-friendly Porsche past a kilometre as fast as the Merc, which passed the mark almost half a second earlier.

The Porsche Cayenne Turbo S might posses the shoutier exterior and grippier four-wheel drive chassis, but on the drag strip it’s the more understated Mercedes S63 AMG that takes the heavyweight crown.