More pictures and details have been revealed of the luxurious new four-seat convertible, available in S 500 and S 63 forms 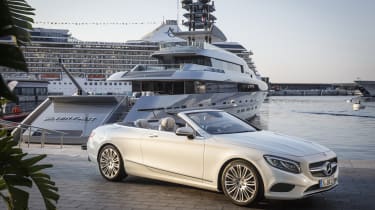 The new Mercedes-Benz S-Class Cabriolet made its official debut at the Frankfurt motor show last week, and now we have more pictures to go with its full specification.

The company is keen to point out that the new Cabriolet is the first luxury open-topped four-seater since 1971, when the W 111 model series went off sale.

That explains the presence of a classic 1961 220 SE Cabriolet in Mercedes’ first press images, but luxury in the new car is on another level entirely from the Sixties classic. 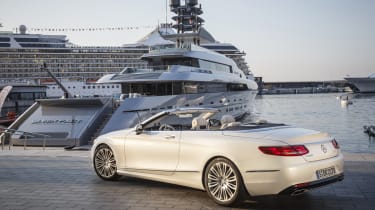 It starts with the styling. While you’d struggle to top the elegant lines of the original, the new car’s flowing curves will be familiar to anyone with keen interest in the coupe. The soft-top roof is equally smooth and leaves the profile unsullied when raised.

Together, they contribute to a drag coefficient of 0.29 – a class benchmark. Torsional chassis rigidity is, according to Mercedes, on a par with the Coupe.

The roof can be dropped – at speeds of up to 37mph – in around 20 seconds, at which point you can also investigate Mercedes’ claim that the new car is the ‘world’s most comfortable convertible.’ 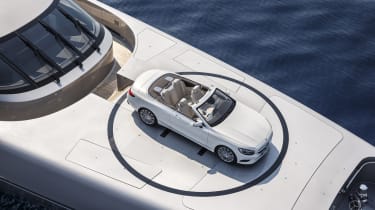 The Thermotronic climate control is even smarter. It adjusts automatically according to whether the roof is up or down, measures humidity on the windscreen to prevent fogging, detects the air quality around the car and even adjusts output according to solar radiation.

There’s also a system that partitions the luggage area when the soft top is in operation, preventing you dropping the roof if there’s luggage in the way but ensuring there’s sill space for belongings when the roof is lowered.

Inside it’s very much an S-Class, with a wide dashboard, twin TFT screens relaying instrument, navigation and infotainment information, and nappa leather as far as the eye can see. Several colours are offered, including an intriguing ‘maritime-inspired combination of deep-sea blue and porcelain’.

The engine range starts with a 449bhp S 500 Cabriolet, equipped with a 9G-Tronic 9-speed automatic transmission and Airmatic suspension. 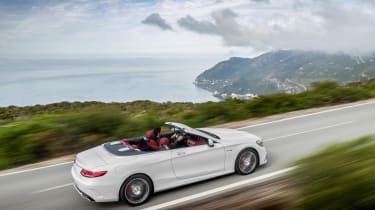 From there, it continues to match the Coupe range, with a Mercedes-AMG S 63 variant. Its twin-turbocharged V8 is build by hand, produces 577bhp, and sends its power through an AMG Speedshift MCT 7-speed transmission. The net result is a 3.9-second 0-62mph lunge and electronically limited 155mph top speed.

In the UK, it’s rear-wheel drive only – but left-hand drive markets will also get a 4Matic all-wheel drive option.

The AMG’s Airmatic suspension is retuned for its higher-performance application, with Sport and Comfort modes, a larger anti-roll bar at the front and stiffer subframe carrier at the rear axle. Optionally available, a ceramic composite braking system sheds 20 per cent from the standard braking system’s weight and should stand up well to the rigours of slowing a two-ton convertible.

The new car will rival the Bentley Continental GT Convertible, and prices will be a step above those of the equivalent coupe – UK pricing hasn’t yet been revealed, but expect a figure in the region of £110,000 for the S 500 variant.

Frankfurt opens its doors to the press on September 15, and public on the September 17. You can follow further stories from the Frankfurt motor show here.