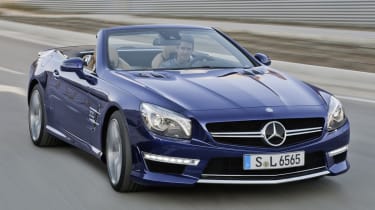 What is it? The Mercedes SL65 AMG roadster. Just what is the point of the SL65 AMG? And why the hell would you buy one? These are the questions that punch you on the nose when you learn that this super-SL costs from £168,250. That’s £10,000 less than the SLS AMG Roadster, while the lighter, rortier V8-powered SL63 AMG is a snip at £110,760. Technical highlights? Its 6-litre twin-turbocharged V12 develops 621bhp at 4800rpm and an astonishing 737lb ft between 2300 and 4300rpm. So there’s its USP – mind-bending torque and the cachet of having ‘V12 Biturbo’ badges on the side gills. Nevermind that it weighs 1950kg to the SL63’s 1845kg, that the V8 version uses the punchy MCT wet-clutch 7-speed automatic gearbox and the 65 has to make do with the more conventional torque-converter 7G-Tronic… And don’t mention that the SLS weighs 1620kg and uses a dual-clutch transmission. Torque, it seems, is outrageously bloody expensive. What’s it like to drive? The engine is awe-inspiringly powerful but it doesn’t have the theatre of an AMG V8 and is almost serenely quiet after the initial start-up bravado. The ride is pretty firm even in its Comfort setting and the steering seems a bit too quick for the chassis, so you make jumpy, slightly ragged progress. There seems to be a mismatch between the V12’s effortlessness, the quick and feel-free steering and the pretty tough ride quality. It’s like the SL65 can’t quite cut loose and play the full-on supercar but is savagely wounded as a GT car, too. However, slowly but surely the SL65 worms its way into your affections. You come to appreciate the complex, expensive engine note and the vast, violent performance that it offers up so seamlessly.  Incredibly, despite that almost tidal-like power the SL65 actually tackles a frost-ravaged, narrow B-road with startling efficiency and at a fearsome pace. The torque (have I mentioned the torque?) papers over the cracks of the slightly tardy and unresponsive gearbox, the Sport Handling ESP setting is beautifully judged and you can drive right into it and let it set and hold the perfect angle of attack, and the body control with the Sport damper mode selected is superb for a big, heavy car. It’s not as sharp as an SLS but there is something intoxicating about the way it delivers, like you’re (almost) in control of Mother Nature. How does it compare? As mentioned earlier, the SL65’s smaller, 537bhp V8-powered SL63 sibling is nearly £60,000 cheaper yet lighter, more alert and nearly as fast. For more badge cachet and semi-supercar vibes, the 490bhp Ferrari California can be specced with its transformational Handling Speciale pack for £156,406. Anything else I need to know? So what is the point of the SL65 AMG? Mercedes and AMG build it because they can. And maybe you buy one just because you can. If I could, I wouldn’t. I’d very much like to have a friend with one, though.