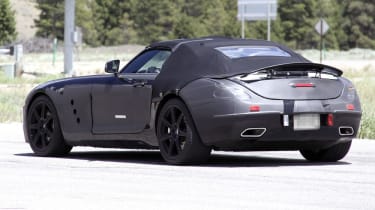 The Mercedes SLS Gullwing hasn’t yet had its official reveal to the world, yet a roadster version’s already in the offing. These spy shots reveal a drop-top version of the SLS AMG supercar out testing in the USA, although unsurprisingly the gullwing doors have been eschewed in favour of more regular openings.

That’s due to the use of a canvas roof that the car will doubtless get to aid weight and dynamics compared to a folding hard-top. Roof and doors aside, though, styling is set to be broadly similar to that of the coupe. That means a striking front end, with gaping grille and large three-pointed star, and Nissan GT-R-esque front lights. There’s the same long bonnet which houses the front mid-mounted engine.

It’s a 6.2-litre V8 unit producing a potent 564bhp (at 6800rpm), and thanks to a hefty weight cut over the outgoing SLR McLaren, performance should be rather good – initial acceleration claims stand at 3.8sec 0-62mph and 12sec to 124mph. The coupe’s top speed is 196mph, but is electronically limited – suggesting the roadster could top out at the same speed.

Dynamics should be good, too – the coupe SLS gets a 48/52 front/rear weight distribution as well as rear-wheel drive. The coupe gets its big unveil at September’s Frankfurt motor show, with sales beginning in early 2010, with a price kick off of around £150,000, putting it directly in the firing line of the Lamborghini LP560-4 and Ferrari’s F430-replacing F450.

Expect the SLS Roadster to follow a year later, priced around £175K.