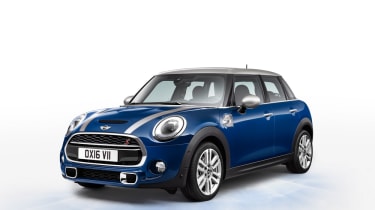 Mini has announced a new Seven special edition which pays tribute to the original 1959 car. Priced in a £18,545, the Mini Seven is essentially an interior and exterior styling pack but features no performance upgrades whatsoever.

The car is available in four different colours: Lapisluxury Blue, Pepper White, Midnight Black and British Racing Green. Inside, you get a combination of fabric and leather seats which feature tartan cloth and Seven detailing on the central instrument cluster. The sill plates also feature the Seven logo. 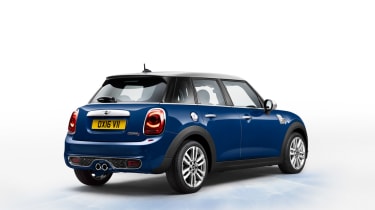 As standard the Seven includes a 6.5-inch navigation screen as well as dual-zone air conditioning. Those keen to take their Seven further can option the Seven Chilli Pack which brings with it full leather, LED headlights and cruise control. All the other Mini options are available.

Exterior tweaks aside from the paint scheme include a contrasting silver roof and door mirrors as well as 17-inch two-tone alloy wheels. Mini is offering the option to include silver bonnet stripes also.

The Mini Seven will make its first appearance at the Goodwood Festival of Speed in June.