The Mini John Cooper Works GP Concept showcases the unhinged, hardcore exterior we could expect from a production version 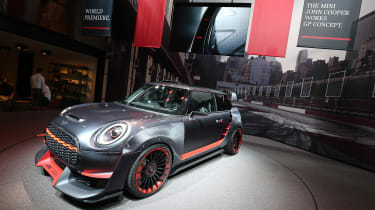 The Frankfurt motor show provided the stage for the Mini John Cooper Works GP Concept's maiden outing. To maintain the brand's jovial and cheeky nature, the extreme Mini John Cooper Works GP Concept offset the sensible aura projecting from the environmentally friendly Electric Mini Concept, with which it shared the stand at the exhibition. The highly distinctive, Mad Max styling, may turn out to be a preview of a third generation Mini GP special edition, which would be produced as a runout model bringing the current car's lifecycle to end.

Mini has yet to release any technical details of the car, meaning this GP Concept is likely to be more of an aesthetic exercise than a preview of what to expect under the clamshell bonnet of any upcoming GP model. Like the brand’s Electric Mini Concept, which is also appeared at Frankfurt, the GP is based on the same basic body shell as on the current third generation car.

> Click here to read about Mini's other Frankfurt 2017 concept

To add more aggression to the car, Mini’s main change is the use of a sort of exoskeleton wrapping along the car’s flanks to form the GP's wider body. Look closely and you’ll see that the extra bodywork is constructed from a textured composite material, contrasting with the metal bodywork that's sitting underneath it. 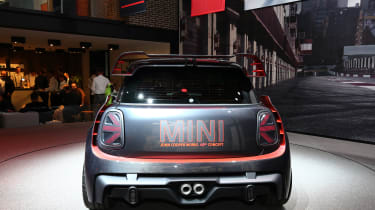 These composite extensions then join onto aggressive front and rear bodywork add-ons, designed to increase downforce and reduce lift. At the front, a new grille design and aggressive front splitter may give us a glimpse into what the facelifted Mini will look like when it comes around in 2018. Out back, the trademark central exhausts are present, sat within an aggressive carbonfibre rear diffuser.

Rear lights with a Union Jack motif are featured here, just as they were on the electric concept, as well as bold graphics taking the place of traditional plastic badging.

Unlike the Electric Mini Concept, the Works GP has a real interior, continuing the racer aesthetic inside with a visible roll-cage and an almost complete cutting back on the interior trim. The seats and some of the remaining dash components are all upholstered in a new knitted textile, giving what Mini calls a ‘classy and modern feel.' 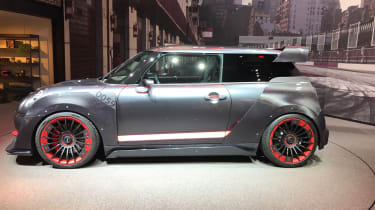 A new motorsport inspired driver information screen replaces the road car’s speedometer and trip computer, pointing towards a possible adoption of a TFT screen for the standard Mini during its upcoming mid-life re-fresh.

Mini's focus on this central three-door hatchback model instead of diversifying into numerous body types like a coupe and roadster should help keep the British marque relevant and competitive as it reaches its 17th year of production under BMW.