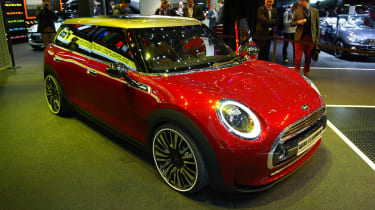 Mini has unveiled the new Clubman concept at the 2014 Geneva motor show. The Concept is rumoured to be almost identical to the production version, which is expected to be available before the end of the year.

This particular version has lost the eccentric Club Door of the original Clubman, adopting a much more conventional four-door approach – albeit with stylish frameless windows. At the rear of the car, the van-style rear doors have been retained. This is likely to remain for the production version too.

Based on the same platform as the recently unveiled 2-series Active Tourer, the Clubman – the longest and widest Mini model to date – will most likely use the same range of three and four-cylinder petrol and diesel engines.

Styling wise, it’s hard not to see the resemblance with its new Mini 'F56' smaller sibling – especially that front grille and overhang. There has been a lot of work on the Clubman concept’s aerodynamics, with so-called ‘AirCurtains’ providing improved flow around the wheel arches. There’s also a roof spoiler to help improve high-speed stability. Unique to the show car is a set of 19-inch alloy wheels.

The interior follows on from what has been achieved with the latest generation Mini Cooper. Mini says that the interior points towards the future of the brand, with a number of ‘premium’ touches. The central speedo is gone, replaced with a huge central screen – as with the top-spec Cooper S models.