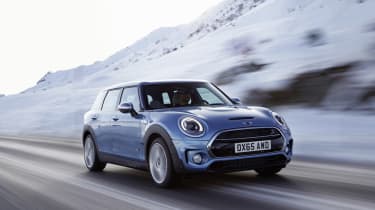 Two models in the Clubman range now have the option of all-wheel drive, the Cooper S Clubman and Cooper SD Clubman.

The All4 system has been tweaked for use in the Clubman, suiting the cars’ sportier nature than the bulkier crossover. The setup is also lighter, and has been designed to take up less space in the Clubman’s lower-profile chassis.

Mini says the benefits are only marginally reduced fuel consumption next to the front-wheel drive versions of each car, and better packaging.

Drive is sent through either a six-speed manual or a Steptronic automatic transmission to the front axle differential. From there, a bevel gear directs power through a propeller shaft to the rear differential, where a clutch feeds power to the rear wheels whenever it’s required.

Mini’s stability control system decides when power is required at the rear, based on acceleration forces as well as speed, accelerator position, engine torque and steering angle. 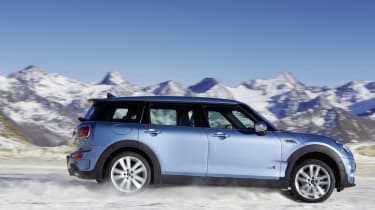 Unlike the new Focus RS’s all-wheel drive setup, the Mini’s All4 layout appears to be designed more for safety than fun, though an electronic locking differential on the front axle should make it suitable for performance driving too.

Both engines are reasonable performers: The Cooper S Clubman All4 develops 189bhp and reaches 62mph in seven seconds flat, or 6.9sec with the Steptronic automatic. That’s two tenths quicker than the front-driver, illustrative of the extra traction. Top speed is 142mph.

As ever, a range of option packs allows owners to personalise their Clubman to ridiculous degrees. The Chili pack – which includes cloth/leather trim, heated seats, automatic air conditioning, LED headlights and fog lights and more – is expected to be most popular.