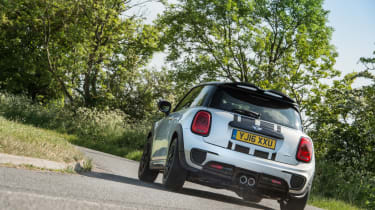 This is the Mini John Cooper Works Challenge. It's our Mini. Our baby. It’s a current JCW combined with parts and components that have proved themselves on the Mini Challenge race car and then honed by some of our team to make a hardcore, track ready, but fun and exhilarating road car.

Dan Prosser, Road test editor, spent some time with Mini in the early stages of development to sculpt the brief for the Challenge. Then, Dan and Jethro Bovingdon, Contributing editor, both helped add the finishing touches to the Challenge road car by choosing the tyres and settings for the dampers to make the car suitable on both road and track.

As significant as Dan and Jethro’s work was, a lot of credit has to be given to the small team at Mini who have worked to create the Challenge. A splinter cell of proper enthusiasts, guys who spend their weekends racing, have toiled and fought to create such a focused car. 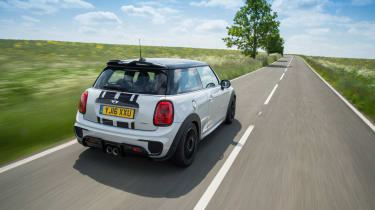 The Challenge is up there with the uncompromising Mini GP as being one of the most focused Mini road cars we’ve ever experienced. So, don’t expect to see a list of electronically assisted this and adaptive that. No. The race-derived components that make up the Challenge are all-mechanical devices.

The Challenge is equipped with Nitron adjustable dampers. The input both Dan and Jethro had was to determine the ideal settings for both road and track. Their conclusion was that 10 clicks at the front and 15 on the rear is perfect for the road. While 15 on the front then 25 at the rear is most suitable for any track work. However, if you wish to experiment and refine the Mini to your own personal tastes, then all it takes is a few twists of the dials on the dampers.

As well as the damper stiffness being adjustable, so is the ride height and camber. From the factory it comes with a touch more negative camber, is 20mm lower at the rear and is a whopping 40mm lower at the front.

Some lightweight Team Dynamics 17” wheels wrap around the JCW’s already massive brake calipers, while Mintex pads have been combined with drilled and grooved discs to improve stopping power even more.

To make the most of all of the intense chassis and brake upgrades, the Challenge sports a set of Michelin Pilot Sport Cup 2 tyres, the same you’d find on a Porsche 911 GT3 RS.

The Challenge has the exact same engine as the regular JCW, that means 228bhp and 236lb ft of torque. Extra traction from the tyres and LSD, the Challenge achieve the same 0-62mph time the standard JCW despite being 15kg heavier.

All of the bells and whistles that make the car so aggressive mean it weighs in at 1215kg.

Irrespective of what the numbers might suggest, the Challenge feels stronger and quicker than the regular JCW Mini. The 2-litre, turbocharged, four-pot certainly isn’t the screamer that it was in the previous generation Mini. The engine’s delivery is linear and smooth, but it doesn’t chase the redline, lusting after revs like the old 1.6. The slightly lethargic engine doesn’t quite match the rabid and eager nature of the rest of the car, but it’s devastatingly effective. 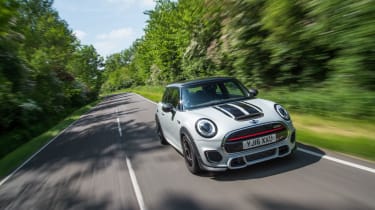 To compensate for any lack of drama, the sports exhaust – controlled via a Bluetooth button on a fob within the car – adds a heap more noise, and off throttle there is a cacophony of bangs and crackles. A tag on the Bluetooth switch says that the loud setting is not for use on the road, but I doubt there’d be many trackdays you’d get away with such an anti-social exhaust either.

The Challenge, thankfully, has the six speed manual gearbox rather than the awkward, slow and unsuitable (for a Mini) dual-clutch automatic. The manual isn’t perfect, however. Slightly too tall gearing might suit the engine’s low down muscularity, but it means you rarely use any gears other than second and third.

As we’ve experienced in other Minis, attempting to quickly change down into second can sometimes cause you to move the lever into the area of the gate allocated for reverse. The long throw of the change, particularly side-to-side, and a lack of physical obstruction for reverse, means it’s far too easy to make this mistake.

As soon as you turn the wheel, the Challenge announces itself as an uncompromising, unapologetic and ruthless performance car; it is stiff.

The 17” wheels and taller tyres might isolate the Challenge from some of the smaller, rougher bits of tarmac slightly more effectively than the regular JCW’s 225/45 19 tyres. But this is marginal and in every other respect it’s less comfortable. 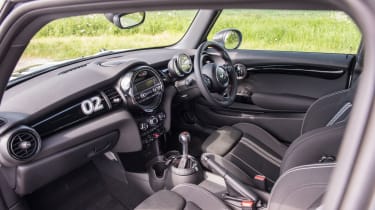 But the chassis firmness bestows the Challenge with such exceptional control. The body remains completely composed, never becoming out of sync with your inputs or the road. There’s also an unwavering feeling that there is no slack in any part of the chassis.

Acceleration, braking and steering all happens immediately. In Sport mode the throttle is sharper and the steering gets a little more weight to it, the extra heft needed for the steering is actually very welcome. When it’s light, it’s easy to add too much angle; the heavier setting slows your inputs down nicely.

The LSD makes itself known in tighter corners underpower, pulling at the steering. However, in slightly quicker corners the diff only serves to allow you to get on the power earlier and pull you round the bend.

It takes some time and confidence to build up to attacking corners at the speed where the Challenge feels best. It’s within its limits at some extremely high speeds, and you need to be committed before you can feel the brilliance of the chassis. 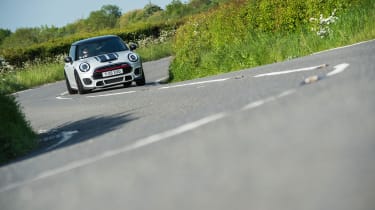 Once you have though, the way the chassis allows you to work the super sticky Cup 2s is remarkable; the harder you push the more grip they find. The more pressure you exert on each corner of the car the more traction each tyre discovers.

During a corner it often feels like the outside tyres are actually trying to fuse with the tarmac when you really lean on them. But as exceptional as the grip is, the feedback you feel – even at such a high grip tolerance – is outstanding. You can feel the tyres nudge towards their limit of adhesion. Sadly very little of these sensations are communicated through the steering, but it hardly seems to matter when the chassis is keeping you so well informed.

Once you’ve found this confidence, and you start to manhandle the Challenge to keep it on the fringes of its traction, it is incredibly rewarding and satisfying. Only minor steering inputs are needed, as you can carve a line through a corner using brakes, throttle and weight transfer to your advantage.

Get beyond the massive amount of grip, which you’ll only do if you’re really aggressive with your inputs, and the Challenge behaves in a predictable and controlled manner. The tyres quickly want to regain purchase on the tarmac, so even the smallest of corrections has you back on your desired path. 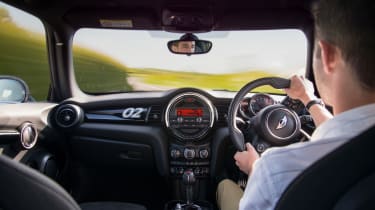 We haven’t been able to drive the Challenge on track, yet. It seems incredible that it would benefit from being even stiffer, but considering how rewarding and exhilarating it is on the road I have complete confidence in Jethro, Dan and the guys from Mini’s instincts and we cannot wait to put it through its paces.

At approximately £32,000 the Challenge will only be for the very dedicated driving enthusiast or true die-hard Mini fan. But in terms of new cars there isn’t anything as committed to thrills, while still relatively practical, as the Challenge this side of a Nissan GT-R Track Edition.

The Ford Focus RS, which can also be equipped from the factory with Michelin Pilot Sport Cup 2s, is a similar price and far more powerful. Its enormous weight and far from simple mechanics are not to everyone’s tastes.

The closest cars, in terms of concept and attitude, are all second hand. The first and second generation Mini GPs both feel smaller and lighter than the Challenge, but the new car, even with rear seats, feels more extreme.

If we’re comparing uncompromising front-wheel drive hot hatches with sublime adjustable handling then we can’t leave out Renault Sport. The Megane 275 Trophy R and its predecessor, the R26.R, remain some of the most captivating and enjoyable hot hatches that have ever existed.

The car the Challenge will have to beat however, will be the new Renault Sport Clio RS16. It will have the Trophy R’s running-gear bundled up into the smaller, lighter Clio body. 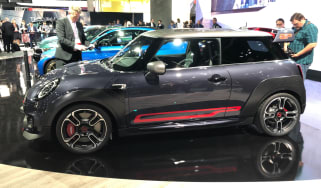