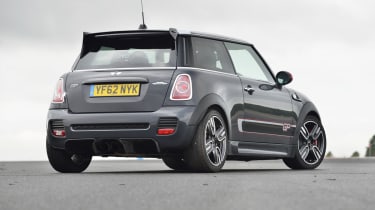 When the Mini John Cooper Works GP was officially confirmed, we were more than a little excited. Then we delved into the specification a little deeper and rejoiced in the detail.

Even a standard Cooper S is a fast and seriously feisty little car, but the GP promised something altogether more serious. Apart from the stickers and the aero kit (which actually reduces drag by six per cent), it benefitted from a radical programme of upgrades: new adjustable-ride-height coilover suspension (with inverted dampers at the front) providing increased camber and reduced front toe-in for greater agility, an all-new braking system featuring six-piston calipers and 330mm front discs, GP-specific and super-sticky trackday tyres, and reconfigured stability control functions including a more aggressive Electronic Differential Lock Control. Oh, and no rear seats. Far from a simple aesthetic makeover, the Works GP had all the makings of a new hero hot hatch.

Costing £28,790, just 2000 will be made. And in 2013's Car of the Year contest, it proved more than capable of competing with some of the best supercars of the last decade on some of the world's best roads. Read why below... Technical highlights? The GP is 20mm lower at the front than a JCW, 15mm at the rear, while adjustable coilover suspension can tweak this further. A new brake set-up at the front comprises six-piston calipers and 330mm vented discs.

The tyres are completely bespoke. Those four-spoke alloys – a GP trademark – measure half an inch wider than normal, so apparently the specially developed Kumho Ecstas they’re wrapped in can’t be transferred to lowlier Minis. The electronic differential gets a different set-up and the front camber is increased to accommodate the new rubber. The steering remains the same, while the engine is simply a normal Cooper Works 1.6-litre turbo four with an ECU tweak taking it from 208 to 215bhp, maximum torque remaining the same at 206lb ft. As with its predecessor, the back seats are binned, while a bold diffuser and spoiler contribute to a 90 per cent reduction in rear lift. What’s it like to drive? For the first few miles, its manic, furious, sometimes unruly character seems too much for most roads. It’s a stiff, hyper-agile car and with plenty of torque-steer and even more lift-off oversteer, the GP is something of a shock when you first experience it. However, with time you start to revel in the sheer enthusiasm and focus of the car and admire Mini for allowing something so uncompromising to make it to the showroom.  It keeps you on your toes but is all the more rewarding for it when you’re making faster progress.Turn-in is cleaner and more precise than the standard John Cooper Works, and the GP’s a more predictable car as you approach its grip limits, and an entertainingly (and sometimes shockingly) wild one as you find and then breach them. The ESP can be pared back to a more lenient ‘GP’ mode, which solely brakes the front wheels to avoid understeer rather than frustratingly cutting power, while with its stability and traction controls disabled it's a wild and quite unforgettable ride. How does it compare? If you want the maddest, most exciting new hot hatch, this is it. Similar money can buy a Vauxhall Astra VXR or a very well specced Renaultsport Megane 265, the latter remaining the best front-drive hatchback on sale, but the Mini is certainly more special (even if its supercharged predecessor shines brighter in this area regard). Stretch to £30,000 and BMW’s altogether more grown up (but brilliant) M135i looks tempting, though it’s very different to the Mini in numerous ways. Anything else I need to know? The new Mini GP costs £6000 more than a regular JCW, but that’s a sum of money you can easily add to a Mini with some innocent options box ticking. We reckon a set of new springs and dampers and a more alert driving experience are more deserving of the cash than a ‘Media Pack’ and some bonnet stripes.