We've been slightly disappointed with the current Mini John Cooper Works, but does some open-top motoring make up for its shortcomings 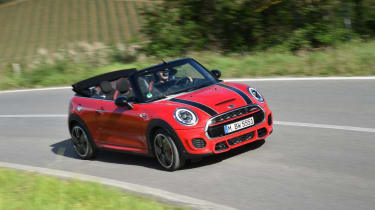 Well, it’s a Mini John Cooper Works with a folding fabric roof. In fact, that’s all there really is to it. It has the same engine, brakes, wheels and suspension. It also has the same quirky interior we’re used to from a Mini, but as is the case with the current generation Mini, a really high quality feel to it too.

The 2-litre four cylinder engine the JCW Convertible shares with the hatch puts out 228bhp and 236lb ft of torque. Those impressive figures are in part to the twin-scroll turbocharger and the variable valve timing on both exhaust and inlet cams.

It also has the huge and impressive Brembo brakes from the hatch. The clearance between the front calipers and the Mini GP-esque 5 spoke wheels is unnervingly close but, as it looks like they simply couldn’t fit bigger calipers even if they’d wanted to, they are undeniably cool.

The folding fabric roof can be opened and closed in 18 seconds, and operated at speeds up to 18mph. There’s a sliding roof function too, which creates a sunroof type effect rather than lowering the whole roof. That can be done at any speed. But possibly more impressive than any of that, and potentially more relevant to Mini buyers, you can have the fabric roof with a Union Jack on it... 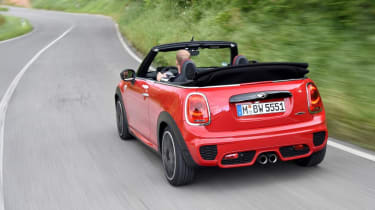 The switch from a 1.6 to a 2-litre engine for the current generation Mini had plenty of promise, and bucked the recent trend for downsizing. A bigger engine suggested more power while, potentially, feeling less turbocharged. Sadly, the engine in this JCW doesn’t have the same thrill and drama of the old 1.6. It doesn’t chase revs like the old engine and feels lazier.

The 2.0 litre is best kept in the mid range, where you can take advantage of its vast swell of torque. Towards the top end, it feels less effective and slightly pointless revving it right out to its redline.

There is, however, a rather pleasant exhaust noise. With the roof down, you can hear the surprisingly low, but not too loud, growl from the back. On the over-run, and occasionally with some gear changes, there’s a pop and crackle from the exhaust. It’s a bit too consistent to seem completely natural, but it is fun.

There are two transmission options for the JCW, a dual clutch paddle shift (Steptronic) or a traditional manual. We’ve tried both in the hatch, and found the manual to be much more suited to the Mini and, thankfully, that’s the gearbox we drove in the Convertible.

It may be the pick of the two, but it’s far from perfect. The ratios are ok, but the abundance of torque from the engine is mostly to thank for that. However the jump from second to third gear feels too large, as second often feels too low. 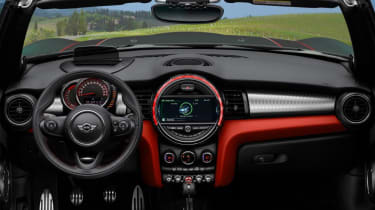 Trying to engage second gear can also be frustrating. The throw of the gearshift is long so very definite inputs are needed to find each gear, particularly when moving left or right across the gate. When changing from third to second, because you’re expecting to move the lever so far, it’s easy to push the gearstick into the part of the gate that deals with reverse. Reverse gear is located to the top and to the left of the gate, next to first, with nothing below it. When attempting to engage second in this area there is no gear to find at the bottom, so while you don’t accidentally get a completely inappropriate gear you simply don’t get any gear at all.

BMW have used this gear arrangement for a long time, also without having a separate mechanism to engage reverse, and it has never been an issue. The Mini’s gearstick is positioned relatively far back in the car, which does make it slightly awkward to operate. But, it’s the quirks of the gearbox and linkage that are more to blame for the difficulty in selecting second.

The JCW Convertible behaves much like the hatch. When met with big jolts through the suspension it does feel less rigid, and with the car in Sport mode there is a slight resonance felt throughout the car. It’s not huge, but it is a shame as the engine and steering feel best in Sport.

The steering isn’t blessed with any more feel in the racier mode, but it does add some weight. Artificially heavy steering isn’t usually something to praise, but the way the JCW’s hyperactive turn-in isn’t complemented by light, easy steering. The heavier setting, although a bit gloopy feeling, slows down your inputs and means you can drive the JCW much more smoothly.

This eager turn-in has been typical of all new Mini’s since, 2001. Previously, the darty front-end was accompanied by a low centre of gravity, minimal body roll and a rear-end that could be adjusted with a lift of the throttle. Sadly, the current JCW doesn’t feel the same. 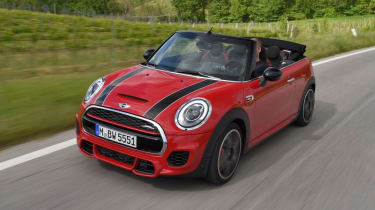 It doesn’t have the same propensity to rotate as previous Minis. On the road, no amount of trail braking or mid corner lift causes the rear end to step out of line. The centre of gravity feels high too, so the JCW’s default reaction is to lean. However, with such firm suspension and very little body roll, the Mini seems to fall onto the tyre’s sidewalls.

The Pirelli Cinturato P7s fitted to the test car offered enough traction in a straight line but little in the way of control during a corner. The transition out of grip was immediate, and whenever they did slip they made unglamorous squealing noises. Without much in the way of rear-end adjustability, all loss of grip results in scruffy understeer. In quicker, shorter corners, where less roll was induced and second gear didn’t need to be found, the JCW felt much more satisfying.

None of the criticisms in terms of the JCW’s handling characteristics are confined to the Convertible; sadly the hatch feels much the same. We have found that the optional Dunlop tyre does make the Mini more fun and raises its limits slightly but the differences are marginal.

Mini’s should be about enjoyment. If you like soft-tops, then the JCW Convertible does offer another layer of fun to the hottest current Mini. Sadly, just not in terms of dynamics.

There are no obvious rivals to the John Cooper Works Convertible. None of the JCW hatch’s rivals have soft-top derivatives so you have to cast the net a bit wider.

There’s the Golf Cabriolet GT, but with only 148bhp it’s significantly slower, isn’t as fun to drive and is £1355 more.

The MX-5 may be lacking two seats and only have 158bhp, but it’s more fun to drive than the Mini (even though it’s far from perfect) and is over £2000 cheaper.

The Mini is as much about style than it is about ultimate performance or practicality, and in those terms the Audi TT Roadster is probably its closest rival. The cheapest TT Roadster, 1.8 TFSI is just over £2000 more than the JCW Mini but has 50bhp less power. The TT is a more sophisticated drive than the Mini, and despite not having the same pace its chassis and grip make it feel more competent, and more satisfying to drive, than the Mini.

If fun and ultimate precision is what you want then this Mini isn’t for you. But, Mini and evo may have the answer to that soon. We have been collaborating with Mini’s engineers to bring you the Mini John Cooper Works Challenge. It will have adjustable suspension and some much more focused tyres, and will be in showrooms in June.