Sprinkled with the magic of Nismo but tuned for everyday driving, is this the perfect GT-R package? 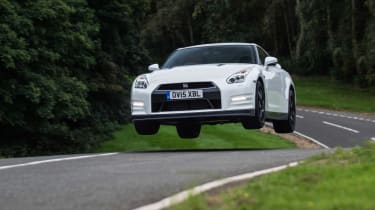 And still they chip, chip away at the GT-R, tweaking spring rates, shaving unsprung mass and seeking out even more performance, stability, agility and excitement. It’s a relentless process, and although it might befuddle those of us who aren’t living in the GT-R bubble, you’ve got to admire the obsessive desire to make this extraordinary car even more so year on year, sometimes even month on month.

This is the latest fruit of that obsession, the GT-R ‘Track Edition Engineered by Nismo’

The drivetrain remains unchanged from the standard car’s, the 3.8-litre twin-turbo V6 producing 542bhp at 6400rpm and 466lb ft at 3200-5800rpm and driving through a six-speed dual-clutch transmission. Performance is the same too, with the claimed 0-62mph time still an incredible 2.7sec and the top speed 196mph. We’ve become blasé about such figures but just think about them for a second. The GT-R remains a crazily fast car.

There are new spring rates and the Bilstein DampTronic setup is revised across the three modes of Comfort, Normal and Race. The lightweight forged Rays alloys are lifted from the Nismo, as are the bespoke Dunlop tyres.

Delve deeper and the detail work is comprehensive. Like the Nismo, the Track Edition has increased rigidity thanks to adhesive bonding as well as spot-welding in certain areas of the structure. High-rigidity bolts are utilised to increase the stiffness of the wheel-hub attachments, the front wishbones feature new links to increase castor for more consistent response under high lateral loads and there’s a hollow rear anti-roll bar borrowed from the Nismo GT-R to increase agility and roll-stiffness whilst reducing weight.

The concept is to create a car with the usability and road capability of the standard GT-R but to infuse it with the much greater turn-in agility and body control of the Nismo model. So is it a compromised halfway house or the perfect GT-R for every situation?

The first thing you do once you’ve started up the Track Edition is select the Comfort damper setting. It is a very firm car. However, where the Nismo feels absolutely rigid at times and unsuitable for all but the very smoothest of surfaces, the Track Edition has just enough compliance to make low-speed driving acceptable. It still hates speed bumps or really lumpy tarmac, but the physical, heavyweight feel of the GT-R is well in tune with the busy ride. If it floated like a Lotus Evora it somehow wouldn’t be right.

No, as ever, the GT-R requires an acceptance that it’s not built for sliding gently around town. The rear diff chunters and judders just as it always has and that’s all part of the GT-R experience – a characteristic rather than a fault – and it’s quite nice to be in a car that isn’t trying to be all things to all men. While everybody else chases that awful term ‘bandwidth’, the GT-R remains absolutely focused. 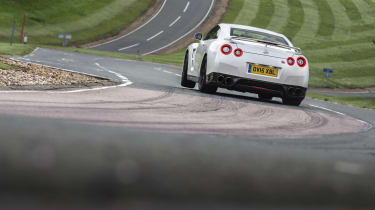 The changes over the standard GT-R are immediately apparent. Whilst it doesn’t have the same startling pointiness of the Nismo, there’s definitely greater turn-in response. This big car actually feels quite light, snapping into corners with no delay between steering input and action. It’s superb mid-corner too, the body exhibiting less roll and the front-end staying perfectly on your chosen line.

There are those who genuinely talk about ‘understeer’ in the context of the GT‑R, but at road speeds that is utter nonsense. Yep, on track the weight of the car through a long corner can result in the front tyres losing grip, but on the road? Please. The Track Edition just bites, stays neutral and then exits under power with a little wiggle of oversteer.

When you break down the cornering style of the GT-R like that, it sounds almost easy, clinical. Again, confounding expectations, it’s anything but. The steering has lovely coarse feedback and the car provides so much information as to what it’s doing and how you might affect it. And such is the speed at which corners unravel that there’s a breathless, frenzied edge that’s incredibly enjoyable and still, after all these years, slightly stupefying.

The Track Edition slots in between the standard GT-R and the Nismo in terms of philosophy and price. At £88,560 it’s £10,530 more than a regular GT-R but £36,440 less than the full-on Nismo. As a unique, manic, omnipotent driving experience it remains a thing of real joy.

In terms of pace and ethos the GT-R’s closest rival is a Porsche 911 Turbo, but those start at £120,598. The GT-R might be more expensive than it was at launch, but it’s still great value in context of its performance.