Mini pulls the wraps off its Countryman John Cooper Works edition, its priciest and most powerful car. 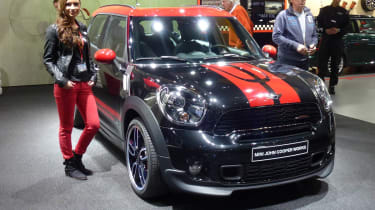 Mini’s long-rumoured Countryman John Cooper Works has been unveiled at the Geneva motor show. It’s the sixth JCW model, joining the existing range of hatchback, convertible, Coupe, Roadster and Clubman, and is the most potent production Mini yet (alongside the wonderful Works GP edition). That’s thanks to a honed version of the 1.6-litre turbo petrol engine used in other Works Minis. The Countryman’s different body shape sees air intake and exhaust system tweaks, while the four-cylinder unit now boasts direct injection and variable valve timing. Maximum power and torque outputs are 215bhp and 221lb ft; up 7bhp and 15lb ft on the rest of the JCW range. A 7.0sec 0-62mph sprint and 140mph top speed are both slightly slower than the hatchback's equivalent figures. 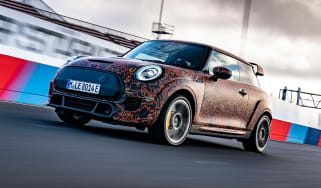