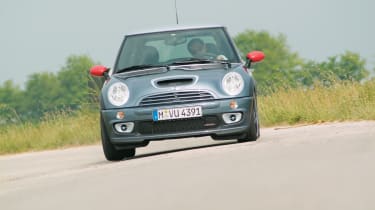 More power, less weight, no compromise. That, BMW would have us believe, is the mantra embodied by the Mini Cooper S Works GP. ‘Think of it as a baby M car,’ they say, ‘maybe even a junior CSL…’

Of course, they would say that. Another view is that the GP is just a chintzy limited edition pitched at hapless fashion victims who are prepared to pay through the nose for the ‘ultimate Mini’. At £22,000 and with just 8bhp more than the 210bhp, £19,120 Mini Cooper S Works, it’s tempting to dismiss it as simply a cynical marketing exercise.

BMW’s reasoning behind the John Cooper Works GP kit (unlike the regular ‘Works’ kit, John Cooper Garages had no involvement with the GP’s development) raises your expectations, however. Andreas Decher, leader of the chassis validation team, is passionate about the car and what it stands for. ‘Some of the tuning products for the Mini are terrible and obviously we have no control over it,’ says Decher, almost with a wince. ‘The GP gives us the chance to do it properly.’ So, what was the target with the GP? Decher smiles. ‘To fulfil the ultimate potential of the Mini.’

The GP dispenses with rear seats and instead sports a huge strut-brace where before you might find miniature passengers or, more usually, bags of shopping. Combined with various other weight-saving measures, including unique aluminium control arms for the rear suspension (saving 7.5kg per side) and very light 18-inch rims (2kg lighter per corner), the GP is 50kg lighter than a Cooper S.

Ride height is dropped by 10mm and the GP has stiffer springs and more aggressive damping. The anti-roll bars remain the same as a standard car. Under its clamshell bonnet, the GP builds on the modifications of the Works kit (faster spinning supercharger, revised intake system, uprated injectors, freer-breathing exhaust) with a more efficient intercooler and reprogrammed engine management.

The result is 218bhp at 7100rpm and 184lb ft at 4600rpm. BMW claims the GP hits 100kph or 62mph from rest in just 6.5sec and can stomp on to 149mph, the new deep front splitter, extended side sills and chunky carbon-fibre rear spoiler ensuring stability by creating mild downforce over each axle.

It’s a serious bit of kit, then. And when your sides are gripped by its snug Recaros and you look around at the bold facia and glance backwards at that strut brace, the GP certainly feels special. Just 2000 will be produced (built at Bertone in Italy) and only 459 will come to the UK. But even without that exclusivity the GP would feel a cut above the usual Mini fare. Something like a VXR Astra or Golf GTi doesn’t even come close.

At low speeds it’s familiar Mini: quick steering, strong torque, stiff, flat ride. Over ragged tarmac the GP shows some subtle differences. It’s still firm but somehow it feels more rounded, less likely to skip over sharp ridges and bounce the car off line. Sounds great, too. The lack of rear seats and reduced sound-deadening overlays the supercharger whine with the sound of gases being fired out of the central twin-outlet exhaust. On a closed throttle it pops and crackles like a highly-tuned Caterham.

The 1.6-litre supercharged engine revs with all the intensity of a little screamer, but the strong torque means you don’t have to stir the sweet-shifting six-speed ‘box to make quick progress. The lower mass and slight jump in power combine to add a sizeable chunk of performance. And it seems strange to say this of the new Mini, but it feels small, nimble and light compared with most modern hot hatches. Next to the Clio 197 it seems positively compact.

So the straights are fun, but it’s in the corners that the GP comes alive. There’s a bit more roll than I’d expected, but that allows the 205/40 Dunlops’ treadblocks to lock into the surface and hook the nose into the apex. Jump on the power as you feel it settle and the standard limited-slip diff transmits all 218bhp to the road with immense composure, steering wheel gently writhing in your hands. Understeer isn’t an issue, the nose pushing just a fraction wide before the diff seems to drag the stubby bonnet back on line and through the corner. The GP’s agility is astonishing. And even accelerating out of tight corners there’s hardly a trace of torque-steer.

Broken surfaces hardly trouble the GP either. Yes, it will occasionally lose contact with the ground (suspension travel is reduced slightly), but the way it regains its footing with hardly a moment’s pause adds to the GP’s maximum-attack style. Not a single horsepower is wasted, the chassis uses every ounce of grip from the tyres and you must use small, precise inputs to get the car to work for you. It’s clinically efficient but still incredibly good fun.

You’ll find the throttle is as great an influence on the GP’s attitude as the steering-wheel, too. With the chassis fully-loaded you can shut-down the power and feel the rear gently give up its grip, pre-empting the diff by killing understeer with a bit of rear-steering. Through quick corners it’s particularly satisfying, the GP perfectly poised and obedient to your every whim. It’s at moments like these that the GP seems worth the premium over a Cooper S Works. £22,000 is a lot of money but the GP serves up massive entertainment.