After internet rumours of its demise, Mitsubishi confirms that Lancer Evolution production continues 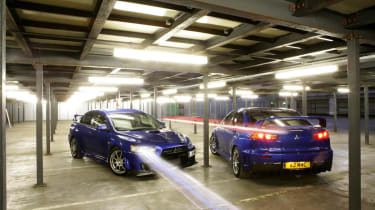 Mitsubishi Lancer Evolution X production continues. The company is keen to commit to its Subaru WRX STI-rivalling sports saloon, after widespread internet rumours of its demise. What is clear, though, is that the next generation Lancer Evolution (the Evo XI, we presume) will be a greener affair, with potentially an electric or hybrid powertrain. With its 2.0-litre turbocharged four-pot engine producing between 290bhp and 354bhp, and emitting up to 328g/km of CO2 – that’s more than the Ferrari 458 Italia’s 562bhp V8 – it’s clear that the Evo X doesn’t slot in too neatly with Mitsubishi’s low-CO2 future and its commitment to plug-in hybrids and pure electric vehicles. And combined with the lack of a Mitsubishi in world rallying, it’s easy to see why many saw the end of Lancer Evolution production coming. But Mitubishi’s statement of intent should be relief to many. Here’s what the company’s Global Chief Executive Osamu Masuko had to say: ‘Production of the current Lancer Evolution X continues as planned. As for its successor, regulations and market feedback will dictate its engineering package and architecture.  ‘MMC has kept the Lancer Evolution sedan evolving as the brand’s highest performing model in the global market. However, as the markets needs and demands change, MMC is considering not advancing the Lancer Evolution concept in the same way as before, but to find a different direction for the Lancer Evolution model to evolve. The new direction, the technologies involved, and corresponding products will be disclosed in due course.’ We pressed Mitsubishi, but no further details are currently available. But we’d wager on plug-in hybrid technology for the next Evo, appearing by 2015. It’s a move that should initiate a sharp drop in CO2 emissions while still providing the necessary power and internal combustion interaction to cling onto its performance car status. Whether Subaru follows suit remains to be seen…