Fastest Mitsubishi Evo X yet is also the best handling. But is it for you? 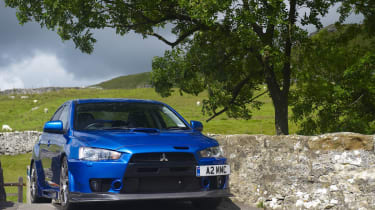 Fifty grand is a whole hill of money by any measure. M3 money, in fact. So spending that sum on an Evo X would seem like a brave, possibly misguided move. Ten grand more than the next one down and you only get an extra 49bhp? And it needs diagnostic down-time every 5000 miles? Chalk it up as one for the lunatic fringe. Or have we got the FQ-400 wrong?

Turns out we have. In the four-tier world of the Evo X line-up, the biggest step change is from FQ-360 to 400. Ignore, if you can, the extra ducts, scoops, slats and carbon trimmings – they’re nothing more than a visual diversion. The engine is worth touching on as it now delivers 201.7bhp per litre thanks to a remapped ECU, a more airy intercooler, a revised turbo and ‘motorsport specification’ injectors. That’s thought to be a world record for a production car, by the way.

But the area where New Zealand-based WRC Developments (responsible, along with Ecutek, for the whole UK FQ line-up) has made the biggest difference is in the suspension. Track widths are up 20mm front and rear, and the whole body sits 30mm lower. Those are big shifts and they make a big difference.

For starters the carbonfibre front splitter occasionally scuffs expensively on rough roads. More stiff track-car than supple rally car, then? Not a bit. In fact the FQ-400 still appears to have plenty of vertical travel (hence the scuffing) and, better still, what movement it has is beautifully, spongily damped. Softer than expected it may be, but the detectable dose of pitch and dive is reassuring, a measure of how hard the car is working, and the FQ-400 combines this with more poise and precision than any of its siblings. Not to mention traction and grip, although that’s largely down to the semi-slick Toyo Proxes R1R tyres. It’s still not as pointy and agile as a IX, but the changes make a genuine difference.

There’s even a proper engine noise. Droning is out, in its place a gruffer note with delightful poppling on the overrun. It doesn’t accelerate like a party popper, either. From 3700 to 7700rpm the delivery is aggressive and sustained, but won’t give you or your passengers whiplash. It’s now a nice engine to use – extremely responsive and very hard working.

The problem, as ever with the Evo X, comes in the three-way equation between cost, driver appeal and image. Yes, this is the ultimate Evo and would run rings round an M3 from Aberystwyth to Bala, delivering both savage speed and genuine enjoyment. But ask yourself this: do you want to look like an 18-year-old Lotto winner with a Demon Tweeks fetish?