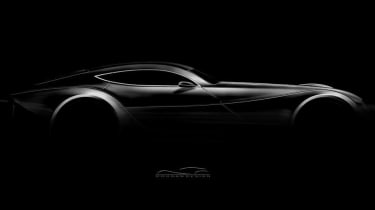 A new Morgan sports car is coming. We don’t get to say it all that often, though fresh from driving the Aero SuperSports we’ve another new model to get excited about: the EvaGT. Ignore the slightly questionable name and you have a four-seat coupe ‘aimed at young families’. It sounds a lot like a rival for the Aston Martin Rapide to us, and while that has four doors, its interior space and target market are likely to mirrored nicely by the Morgan. Judging by the teaser image (above), it’ll look cracking – a long sweeping grand tourer with obvious inspiration from the Aeromax and SuperSports. And underneath that grand bonnet lies an engine we’re big fans of – the twin-turbo 3-litre straight-six that stars in a number of BMWs, including the Z4 sDrive35i we’ve been running as a long-termer. It boasts 302bhp and 295lb ft of torque while the sensible numbers stack up rather well, too: 40mpg and 200g/km of CO2 are quoted. Morgan claims the engine will hustle the 1250kg EvaGT  from 0 to 60mph in 4.5sec and onto a top speed of 170mph. Both six-speed manual and six-speed automatic transmissions are offered, transferring power to the rear wheels. The car’s relatively low weight is achieved via use of a bonded aluminium chassis closely related to that of the Morgan Aero SuperSports, while the bodywork is crafted from superformed aluminium. There’s much talk of minimal shutlines, hidden windscreen wipers and flush door handles; the EvaGT is set to be a quality item. The new Morgan will get a full unveil at the 2010 Pebble Beach concours event in California on August 15, order books opening at the same time. A £5000 deposit will secure you one of the first 100 of a limited run production beginning in 2012. There’s no word on final list pricing just yet, but expect to pay north of £100,000.