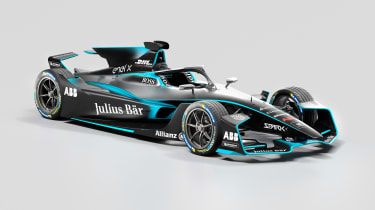 Formula E’s development both as a series and from a technological standpoint continues apace, with the sport now revealing the design its cars will carry in its seventh season.

The electric racing series switched to its second-generation car, known as Gen2, in season five, the 2018-2019 championship, and for the 2020-2021 season the Gen2 car will evolve, appropriately wearing the Gen2 Evo tag.

The Gen2 chassis will remain unchanged, as will the use of 18-inch wheels and Michelin tyres designed for both dry and wet running. The specification will be broadly similar to the existing car’s, outside of the constant battery, battery management and powertrain improvements that are quickly marking out Formula E as a valuable development tool for road-going electric vehicle development.

Design-wise, the Gen2 Evo is denoted by a new front wing, a prominent dorsal fin not unlike those used in some previous F1 seasons or the WEC, while the rear wing too has changed in shape. It’s worth noting though that aero actually plays very little role in Formula E, and not just because street circuits limit the speed at which aero can be effective. Much greater emphasis is put on mechanical grip – in turn, helping breed some of the close racing for which Formula E is increasingly known.

‘[The Gen2 Evo’s] futuristic design once again showcases Formula E as the category for innovation in both technological advances and appearance,’ said Alejandro Agag, the sport’s founder and chairman, with FIA president Jean Todt adding: ‘The ABB FIA Formula E Championship is in only its sixth season of competition, yet the technology within it has come a long way, and can benefit all road users.’ 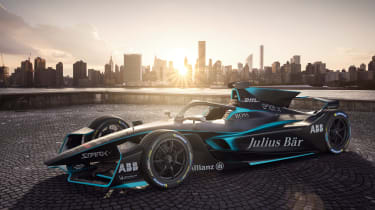 As evidence of this, Jaguar recently revealed that it was able to recalibrate the electronics of its i-Pace electric car for greater range thanks to lessons learned from its Formula E team. With the road-relevance of sports such as Formula 1 increasingly harder to determine (or at least more difficult for manufacturers to market to consumers), expect to hear similar tales from EV-producing car makers over the next few years.