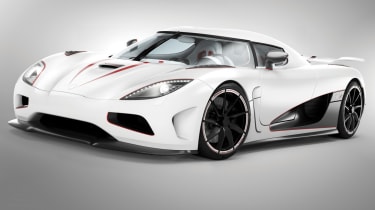 4
The new Koenigsegg Agera R is bound to be one of the main stars of the 2011 Geneva motor show.  Boasting 1115bhp, thanks to a revised version of the Agera 5-litre V8 engine (capable of running on bio-fuel), the Agera R will be the most powerful Koenigsegg ever produced. No performance claims are yet being made but it’s bound to be incredible thanks to a power to weight ratio dramatically better than the Bugatti Veyron. That’s thanks to the Agera R’s remarkable 1330kg dry-weight, over half a ton lighter than the big Bug. The Agera R displayed at Geneva is a very special customer car, set to be delivered to its new Norwegian owner straight after the show closes. It comes equipped with a special roof section featuring an integrated Thule carbonfibre ski-box containing two pairs of Koenigsegg skis. This £17,593 roof-box can be easily swapped for a conventional roof section when not required and has a top speed rating of 186mph. Winter wheels and tyres are another £7322 option… The price of the optional ‘R’ package, on top of a normal £875,000 Agera, is £132,000 at current exchange rates but that looks like something of a bargain compared to the £168,000 Koenigsegg charges for creating a bare carbon car. evo visited the Koenigsegg factory a few weeks ago and there will be a special feature on the Agera R, together with an interview with Christian Koenigsegg, in Issue 155, on sale Wednesday March 2.  Above is a brief video filmed at the Koenigsegg factory while we were there. Click here for all of evo’s 2011 Geneva motor show coverage