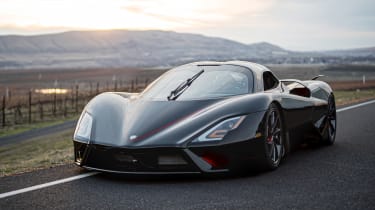 Remember the SSC Ultimate Aero? It was the American-built hypercar that, back in 2007, briefly stole the title of world’s fastest production car away from the Bugatti Veyron, by recording a two-way average speed of 256.18mph. Its successor, the Tuatara, was announced in 2011 and unveiled in production-spec at Pebble Beach early in 2018.

Following a look at the model on the road, the small-scale US car manufacturer announced that the very first example rolled off its production line early last year, over ten years since the project’s inception – a further 99 are set to be produced.

With SSC aiming for the rather ambitious goal of a 300mph top speed, the Tuatara will need some impressive specs to reach it. A mid-mounted, twin-turbo flat-plane crank 5.9-litre V8 pushes up to 1750bhp to the rear wheels through a seven-speed automated manual gearbox. The car also features a carbonfibre chassis and body, has a dry weight of 1247kg and an impressive drag coefficient of just 0.279 – both claims better than figures for the Koenigsegg Agera (which currently holds the production car speed record) and Bugatti Veyron.

Though SSC is still yet to record a record-breaking top speed run, it has announced that recent tests saw it sprint from 60mph to 120mph in a staggering 2.5sec. With power going to the rear wheels alone, this is an incredibly impressive feat, and one that makes us rather excited about what else it may have in store. The following video gives you an idea of the physics-defying acceleration it’s capable of.

In November of 2017, Koenigsegg’s Agera RS took the crown of world’s fastest production car, with a staggering two-way average speed of 277.9mph. Factory test driver Niklas Lilja put the car’s 5-litre turbocharged V8 to good use, hitting over 284.6mph in one direction and smashing the Veyron Super Sport’s previous speed of 267.8mph.

Bugatti has since set another benchmark, hitting the 300mph mark late last year in the Chiron Super Sport 300+. Might SSC snatch the title from the French marque? We’ll have to wait and see.