The Tuatara’s record-breaking run has come under fire, so SSC is hoping to set the record straight with a second attempt 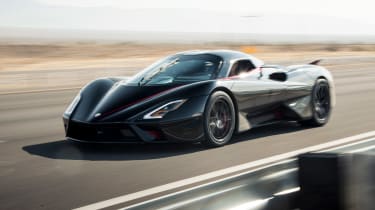 The SSC Ultimate Aero was the American hypercar that briefly stole the title of world’s fastest production car from the Bugatti Veyron in 2007 and now its successor, the Tuatara, hopes to do the same. Though it was said to hit 331mph in early October, questions have been raised over its legitimacy, with a second run now on the cards...

It’s been over a decade since the project’s inception, but the small-scale manufacturer finally put the Tuatara through its paces earlier this month achieving a quoted peak speed of 331mph, and a two-way average of 316.1mph – that would be 38.2mph faster than the Koenigsegg Agera RS, which achieved a two-way average of 277.9mph.

Just a few days after the record was announced, however, analysis of the onboard video footage showed the Tuatara ‘only’ peaked at 280mph, as opposed to the quoted 331mph. Questions over gearing have also been raised, however the transaxle manufacturer refused to disclose information on the ratios supplied to SSC.

In response to the claims the speed wasn’t genuine SSC founder, Jerod Shelby, released a video acknowledging the findings revealing that its own analysis of the video footage resulted in the same inconsistencies. Shelby went on to say: ‘No matter what we do in the coming days to salvage this particular record, it's always going to have a stain on it,’ adding ‘...we have to re-run the record. We have to do this again and do it in a way that it's undeniable and irrefutable.’ 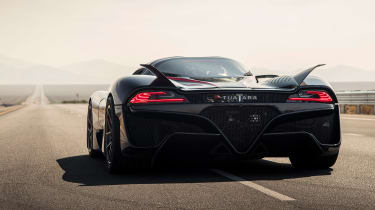 Unlike the first attempt, SSC claims it will ensure that GPS equipment from multiple companies will be onboard, with employees there on the day to scrutinise each run. As for when this will take place, Shelby said it would be in the ‘very near future.’

Unlike some recent record breaking attempts, the Tuatara attempting these speeds is said to be production-spec, and identical to the product delivered to customers. It is also wearing road-legal Michelin Pilot Sport Cup 2 and running on an E85 fuel blend, which is often used by other high-performance hypercar manufacturers, such as Koenigsegg, to increase engine performance. 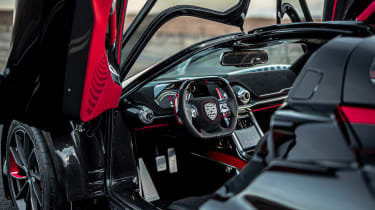 The engine providing the power for such speeds is a twin-turbocharged flat-plane crank 5.9-litre V8 co-developed by SSC and Nelson Racing Engines, sending 1750bhp to the rear wheels through a seven-speed automated manual gearbox. The chassis it’s fitted within is a carbonfibre monocoque, and has a dry weight of 1247kg, thanks also in part to its carbonfibre body.

In order to reach these speeds, more than just power is required, with the SSC team streamlining the Tuatara’s body to an impressive drag coefficient of just 0.279. SSC claims that it maintained a 37% front and 63% rear aerodynamic balance from 150mph to its peak speed during the first record attempt.

First customer cars have already been delivered, with a total of 99 to be produced in total, but pricing remains unconfirmed.