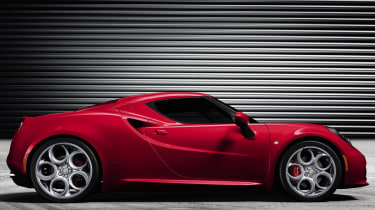 Alfa Romeo has released new pictures of its 4C sports car. It has revealed the 4C's attention-grabbing side profile and driver-focused interior ahead of its appearance at the 2013 Geneva motor show.

The interior photograph appears to show a snug, sporty cabin, with leather sports seats, a small, flat-bottomed steering wheel and the lack of a traditional gear selector, a push button system as seen in the Lotus Evora IPS and automatic Aston Martin models the likely alternative. As previously reported, the mid-engined, rear-drive 4C will feature an aluminium version of Alfa Romeo’s 1.7-litre 4-cylinder turbo engine producing around 240bhp. Despite the 4C apparently ‘representing the true essence of a sports car’, it will only be available with Alfa’s six-speed TCT twin–clutch gearbox rather than a traditional manual. Steering wheel-mounted paddles will still allow the driver to manually control the dry-clutch transmission if they wish. The engine will also feature a revolutionary scavenging control system in an attempt to rid the car of any turbo-lag, maximising acceleration and throttle response. The company’s DNA selectable driving mode system will also feature, but unlike most cars in the Alfa Romeo range it will feature four profiles rather than the usual three. In addition to Dynamic, Normal and All-weather, a fourth ‘Race’ mode will also be available and is designed to enhance the driving experience for buyers intending to take their 4C on track.  Alfa says that the car will achieve a power-to-weight ratio of 243bhp/ton, and it will fall comfortably under the 1000kg mark – markedly less than one of evo’s current favourite sports cars - the Porsche Cayman. The official price and performance figures for the car are yet to be revealed, but are likely to be announced soon after the Alfa Romeo 4C's appearance at the Geneva motor show.